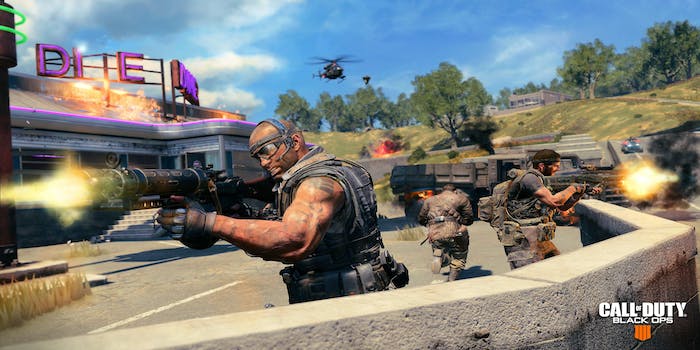 Call of Duty: Black Ops 4 is a streamlined return to the series’ irresistible charm

No single player? No problem for one of the heftiest editions of this massive annual shooter.

Ignore what its name might suggest: Black Ops 4 is the biggest change for Call of Duty in a long time. After 2010’s Black Ops kicked off a mini-franchise inside the larger series, fans grew enamored with the sci-fi–inspired take on military fiction. While the first three Black Ops titles centered on bombastic, alternate history campaigns, this entry attempts to bring storytelling to the forefront of its multiplayer modes.

There’s no central narrative to follow, but Black Ops 4 builds an intricate world with interesting threads woven throughout each mode offered. Developer Treyarch has opted to follow a recent trend instead of catering to single player fans, introducing the first Call of Duty Battle Royale.

With expected multiplayer and zombie modes rounding out the package, there’s a lot to see in Black Ops 4. And while gameplay is still unmistakably Call of Duty, a few key changes set this entry in a league of its own. While the game feels cohesive overall, each mode does offer a remarkably different experience. 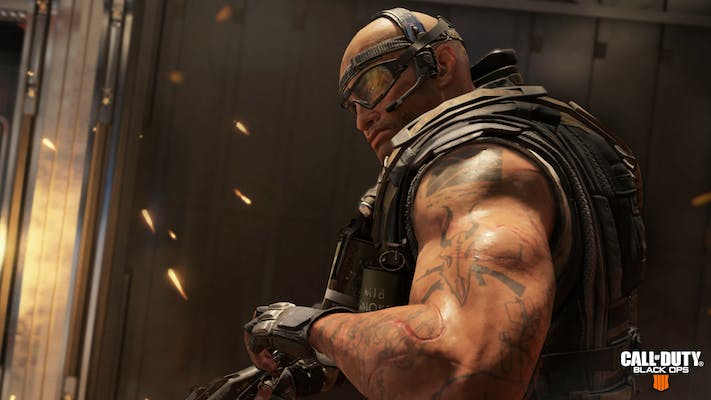 Because this is Call of Duty, player-vs.-player mayhem will always be the main attraction. Following over a decade of this near-perfect formula, Black Ops 4 includes most of your favorite modes and an impressive collection of 14 maps, including reworked classics. Team Deathmatch, Free-For-All, Search and Destroy, and Domination all make a return, with hardcore variants as well. At this point, players know what to expect from this multiplayer content, and there aren’t many surprises in Black Ops 4.

What has changed, however, is the moment-to-moment gameplay. Looking back at the Black Ops 4 reveal event, the most attention was given to what had been removed. Developers coyly teased wall-running and thrust-jumping as fans feverishly chanted their disapproval. What first seemed like a celebration of players’ demands winning over the studio’s ambition has actualized itself as a streamlined return to the series’ irresistible charm.

Black Ops 4 bills itself as a return to “boots on the ground” combat, and the removal of most fantastical features feels rewarding. These changes give every character a firm sense of spatial awareness and realign strategies around tight teamwork and nimble movement. Being able to recognize your team’s location relative to major landmarks and enemy players helps a match swing too far toward a lopsided victory or defeat.

Manual healing is another factor benefiting this “grounded” Call of Duty experience. Rather than crouching behind cover to restore hit points, players now inject a healing serum. Adding this mechanic turns hectic fire fights into a game of cat-and-mouse, elongating tense confrontations between players. Previous games highlighted fast-paced combat with quick revivals. But Black Ops 4 is comfortable letting players drag out skirmishes in both open areas and tight corridors.

The varied Specialist classes also prevent Black Ops 4’s multiplayer mode from ever feeling stale. Each of these heroes comes equipped with different heavy weapons and explosives. While their play styles aren’t as diverse as the cast of Overwatch, team composition can be the key to a decisive win. Calculating when to call in Nomad’s attack dog paired with other killstreak bonuses adds to the communication and coordination required between players. Like most multiplayer experiences, Black Ops 4 is best with friends, but that doesn’t mean solo players can’t have fun. 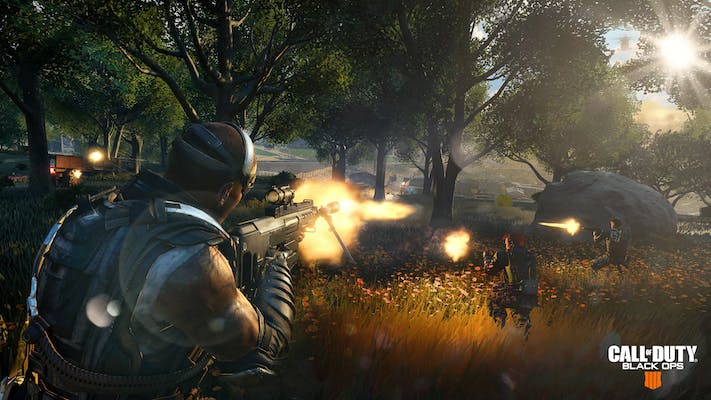 If you’re in the mood for Call of Duty, but customizing your class or navigating the many weapon and equipment options sounds overwhelming, there’s an answer. Surprising few, Black Ops 4 features the series’ first foray into Battle Royale chaos. Blackout translates the brilliant shooting mechanics of traditional PVP into a larger, sprawling arena. The interconnected areas on this map feel more segmented than other games in the genre, but that isn’t a bad thing. Being inside a hangar or roaming an open field require different tactics, and Blackout offers the options to adapt on the fly.

Vehicles, perks, and weapons all play into every round of this mode. Everyone starts with the same default character, collecting equipment as they traverse the massive map. Call of Duty’s wealth of minor tweaks, like silent movement and faster climbing, work well as lootable items. Should you survive the opening onslaught as the playable area shrinks in size, your character is likely going to feel much different from anyone else’s.

Again, this helps Blackout from getting stale. Every match can be tackled differently, and you’ll likely find your own stories to tell. Playing with a squad lends itself to the most tactical and exciting experience, but a solo match is still worth your time.

For as impressive as the tech behind Blackout is, I can’t help feeling a lack of distinct identity. What makes Call of Duty so compelling at the core is variety. Going up against an enemy that keeps dropping you? Swap over to a shotgun and blast them away. Opposing team members camping on an objective? Equip sticky grenades and clear them out. The ability to plot out equipment profiles and plan for stressful situations has been paramount in the suite of multiplayer modes. In Blackout, your plans are wiped clean after every matchup, and you learn solely from your mistakes.

Tense, grounded combat is consistent across the traditional modes and Blackout, but the loss of respawns lessens the incentive to experiment in the Battle Royale experiment. I found myself moving sluggishly, double-checking any opportunity for an enemy to get the drop on me. This might be indicative of how the genre encourages players to proceed with reservation, but games like Fortnite and PUBG still find ways to be exciting outside of combat. Running and gunning is Call of Duty’s claim to fame, and something is lost when adapting the goal to be about long-term survival.

As it stands now, Blackout is an interesting change of pace for Call of Duty. Treyarch will likely continue to update and adapt the mode over time, and it’s already the most popular attraction in Black Ops 4. As the genre shifts, Blackout might emerge as the biggest Battle Royale. But it doesn’t feel like the future Call of Duty has been working toward. 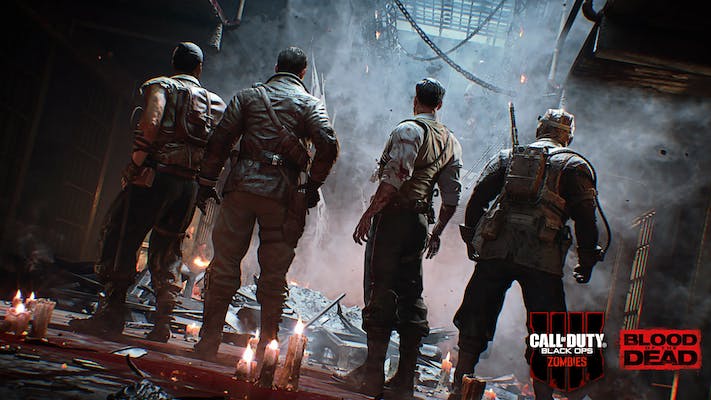 Before there was Battle Royale, there were Horde modes. A one-off mission at the end of World at War, Nazi Zombies fundamentally changed Call of Duty forever. Emphasizing teamwork and role-playing, Zombies has created a mini-universe inside the Black Ops franchise. Jumping across time periods and alternate dimensions, this gleefully goofy series of co-op missions has jumped the shark for the better in Black Ops 4.

The game ships with three separate maps connected by story. Familiar locations and characters resurface across this four-player mode. Tackling waves of undead enemies, you work together to unlock upgrades and open up new areas. The mechanics of this mode are nearly identical to the rest of the game, but slower and with even more grounded combat.

The chaotic escalation of each round is layered with more intense enemies, new weapon unlocks, and genuinely interesting powerups. While this mode feels the least like what traditional Call of Duty is, the content offered can occupy a serious chunk of time. Two of the prominent maps include a gladiatorial arena and the deck of a sinking ship. The lore of this spinoff is also hard to follow, with a majority of dialogue going by quickly, lost under the madness of gameplay.

Overall, a lack of cohesion hurts Black Ops 4. Playing through every mode is rewarding in its own right, but it doesn’t feel like you’re working toward anything in the long run. Unlocking skins and parts in multiplayer has no effect on the other modes. Blackout only dishes out rewards to the most skilled players who can pull off a victory. And Zombies is full of so many extraneous options that only hardcore fans will get invested in.

But this is Call of Duty, and it provides the fast-paced, repetitive experience most of the audience is coming for. The first time I booted up Black Ops 4, there was no direction or welcome messages to ease me into the experience. The menu simply asks what mode you’d like to play and continues to layer on complicated menus. Gameplay tutorials are short and filled with profane, immature dialogue. It may not be that Black Ops 4 is directly pandering to its audience, but the development team has certainly figured out the proper formula to make the kind of game that will be a big hit with the right crowd.

Call of Duty Black Ops 4 is available now for PC, PlayStation 4 and Xbox One. This review was written based on a PS4 copy of the game provided by the publisher.