Despite his deceptively limited screentime, Captain America‘s best friend Bucky Barnes (a.k.a. the Winter Soldier) is a breakout star of the Marvel Cinematic Universe.

His troubled past and uncertain future have inspired reams of fanfic, and if you’re into Marvel fandom, you’ve probably seen Kaitlin Wadley‘s fanart: intense, detailed portraits where the characters either seem to be posing for the artist, or are casually going about their daily lives.

Wadley’s new artbook, anagnorisis, is the latest success story in the recent trend for crowdfunded fanzines, tripling its Kickstarter goal within a couple of days. As a graduate of the Minneapolis College of Art and Design, Wadley spent several years working to support herself as an artist. She was finally able to quit her day job to go full time last year.

We spoke to her about the new artbook (out in September), the eternal appeal of Bucky Barnes, and how she uses fanart to subvert the male gaze. 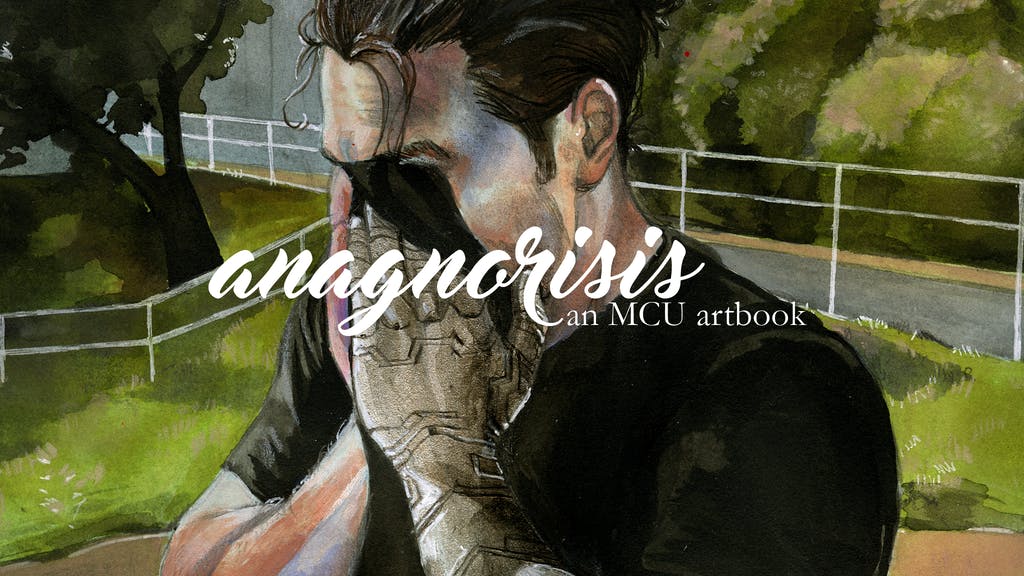 A lot of your work focuses on Bucky Barnes, with a more emotional tone than his typical role in the movies. What inspires you so much about this character?

I think partly my work with Bucky does stem from a kind of longstanding frustration with the MCU’s continued refusal to give me what I want. It’s kind of a vicious cycle, because I go into the movies hopeful but knowing that I’m probably not going to get a coherent emotional arc or an examination of Bucky’s psyche, and then of course neither of those things ever happen. So I end up thinking, well, I guess I better make that for myself!

I think that Bucky also resonates with a lot of fans because he acts as a mirror that we can hold up to ourselves to examine the traumas that are otherwise too uncomfortable to look at. It gets tempting to tell yourself, “I don’t have the right to be upset about this,” or to dismiss those traumas as being too minor to dwell on.

But with Bucky, having been through this profound trauma, I don’t think anyone in their right mind would say that he doesn’t have a right to be upset, sad, anxious, etc. And in acknowledging that and exploring Bucky’s psyche, it can be kind of cathartic and healing. 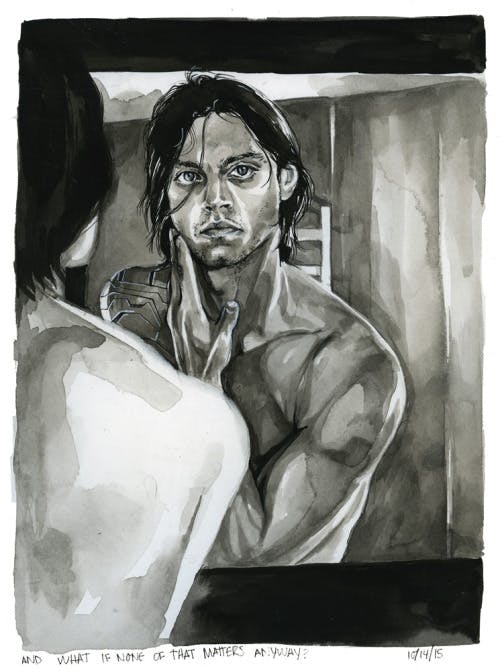 Do you think your style has been influenced by MCU fandom and fanfic tropes?

I think that being on tumblr, being aware of and participating in fandom, it would be impossible not to have absorbed some of those tropes by osmosis, though I couldn’t say exactly what I absorbed or how it’s expressed in my paintings.

I will definitely say that, as an artist, I’ve been really interested in subverting the Gaze, and what that could mean, for a long time. Much of my work has dealt with the male figure, and with MCU fanart it’s a fascinating opportunity to take these masculine bodies that are considered to be unassailable pinnacles of strength and show them in moments of vulnerability and sensuality. I think that interest dovetails nicely into what fandom is interested in.

You have a really distinctive style, often drawing characters as if they’re posing for portraits. Could you tell me a bit about that choice? Is it partly a reference to Steve Rogers being an artist, as if he’s the one drawing the portraits?

The way I portray Bucky goes back to what I mentioned previously about subverting the masculine Gaze—I guess the simplest way to put it is that I draw what I want to see. As a woman, there’s a lot of visual culture that’s overtly coded as not being “for” me in the sense that much of the media we see is intended to appeal to the straight, cis man. So in that sense there’s something a bit subversive in just being straightforward about saying, “no, I’m the one in control of this, and I’m drawing what I want to see.”

I guess if anything, the idea is that Bucky is posing for me. I love the trope of Steve as an artist, and it’s something I’ve used pretty frequently in my writing; I certainly don’t mind if people interpret my work that way and I find it very charming when they do, but it’s not necessarily my intent. 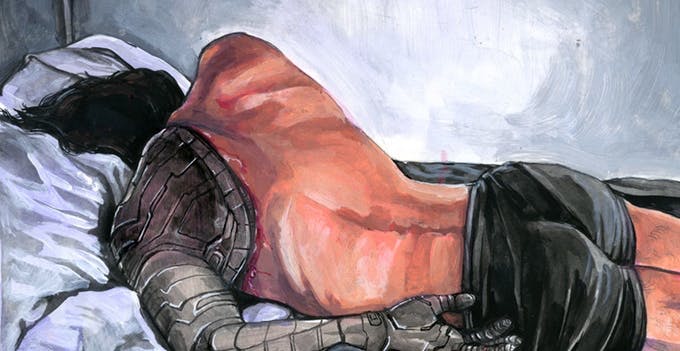 What medium do you use? What’s your process when working on a new piece?

My black-and-white work is primarily painted with India ink, whereas my color work is a combination of watercolor, acrylic, and sometimes colored pencil. I also use graphite, Micron pen, and white gel pen for fine detail work.

My process is pretty straightforward; once I have an idea of what I want to draw, I set about gathering reference material. I try to take and use my own reference whenever possible, and usually my “final” reference image ends up being a hilarious hodgepodge of bad Photoshop. From there, I move on to a pencil sketch. I try to go lighter on the pencil if I’m working with ink, due to its transparent nature, but with acrylic it’s not as important. I generally start with areas of shadow when I’m painting, and I paint those primarily in watercolor, and then move on to the highlight areas, which are usually painted with acrylic. Finally, I go back in with graphite and pen to solidify the fine details.

Finally, what should fans expect from your Kickstarter book?

In anagnorisis I’ve compiled the best of my MCU-related work from 2014-2016 and I’ll also be painting a few extras that will be exclusive to the book—never posted or sold elsewhere. It’ll be a 52-page 8.5×11″ softcover perfect-bound book, printed in full color on glossy paper.

I’m excited to have the opportunity to include not only paintings that have been fan favorites, but some of my own favorite work as well. And I’m incredibly grateful for the support that’s made this project possible.