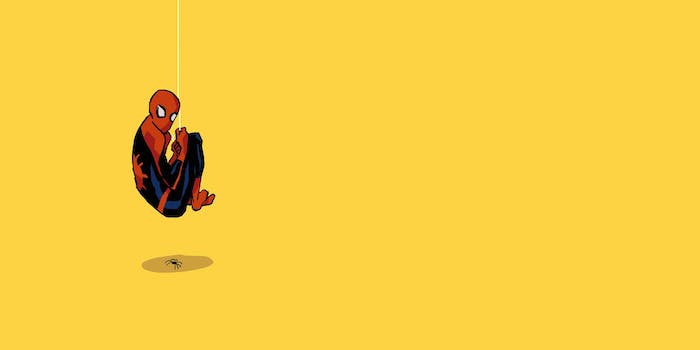 This version of Spidey still has the dorky teen humor and physicality of the canon comics, but the appeal lies in its low-key setting. Like the many Avengers fanfics depicting domestic scenes during the team’s downtime (not to mention the popular Captain America diary comic American Captain), Blumenreich’s fanart satisfies the desire to see superheroes on a more personal level, when the fate of the universe isn’t hanging in the balance.

Blumenreich’s Spidey art ranges from single-panel images to short stories, including one very popular webcomic where Spider-Man protects a woman from street harassment. We interviewed Blumenreich about her new Spidey zine, which is free to download, and includes all of her Spider-Man art to date. 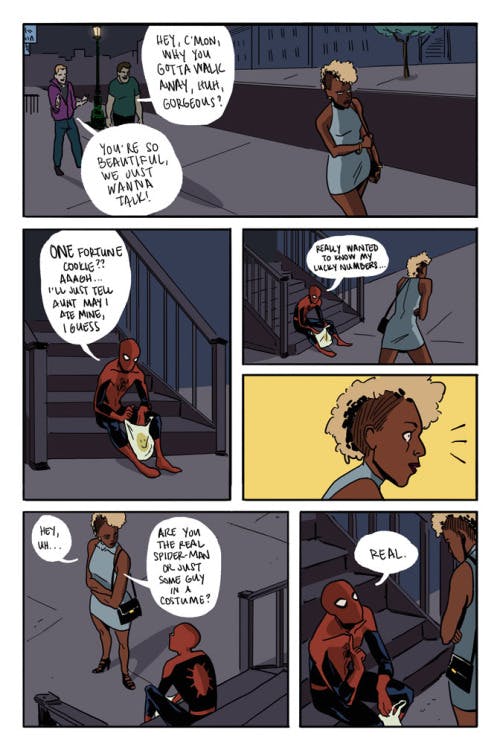 Could you tell me a bit about your background as an artist? How would you describe your original work?

In terms of formal education, I went to the Minneapolis College of Art & Design, and took a bazillion years going on and off to get a degree in comics. Was it worth it? Time will tell. In my own work I like to focus on people and relationships. Not necessarily romantic ones, just the way people interact with each other.

What drew you to make Spider-Man fan comics in particular?

I think it started as a joke between me and a friend (Kazimir Lee Iskander). We were talking about the forced patriotism in the first Sam Raimi Spider-Man movie, where, you know, right at the end Spidey’s swinging around New York and he lands on a flagpole and the American flag is billowing behind him? And we thought, how funny would it be if he missed.

This spawned a few comics about Spider-Man’s powers going wrong in minor, stupid ways. And then I started thinking more about his character. Like, what sort of things would this super-powered nerd be into? And then I started thinking about the other people who occupy his universe and what Peter Parker’s place within that universe is, and the whole thing has just spiraled massively out of control, really. 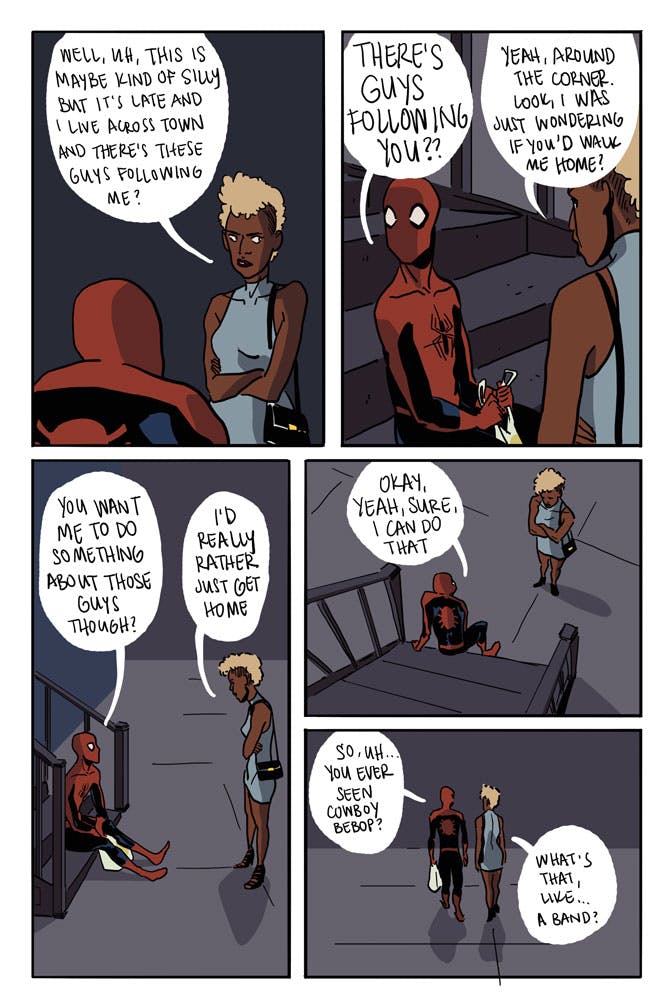 Do you prefer to draw Peter Parker as a teen? You really capture the kid-like aspects of his character, especially in the sense that a lot of comics basically make him look like an adult, even when he’s meant to be in high school.

I do prefer him as a teen! I understand him as a teen, I guess. Teenage Peter Parker is a bit small and ineffective, he’s a social loser, he’s got this tragic past, but also this nerdy, upbeat, goofball demeanor, and you throw some high school drama into the mix and bam, there’s Spider-Man. Oh and I guess he’s got superpowers, too, or whatever. A minor footnote.

Ah jeez, comics with grown-up looking teenagers. I am going to go ahead and blame movies and TV. I mean, with the rare exception, any time you see a “teenager” on screen, you’re watching some hot, young 20-something actor written by an adult approximating teen behavior, and this is a version of teenagers that you’re probably far more exposed to than actual teenagers. So it can be hard to shake that from memory. It’s also surprising how young teenagers look, mostly because you don’t remember looking that young at all. Plus, there’s also this subtle physical distinction between every single year of being a teenager.

People really respond to the “slice of life” stuff in your zine, like Spidey protecting someone from street harassment. Do you feel like that aspect is missing from the canon comics, or is it more that people just love Spidey’s personality?

I do think the slice-of-life stuff is missing! Or at least, not emphasized enough for my tastes. I don’t care if Spider-Man is facing down the Sinister Six or if Green Goblin has some plan to blow up New York or the Vulture is…doing whatever the Vulture does. Like, how does that apply to me? How am I meant to relate to this? I think Spider-Man’s powers should take a backseat to the rest of his life, honestly. And there are better, more meaningful ways to show he’s a hero than have him punch evil scientist billionaires in goofy costumes.

As for his personality? Correct me if I’m wrong here (cue a fleet of fanboy internet commenters busting through the wall: “UM ACTUALLY…”) but I tend to see canon Spider-Man as a beta-male power fantasy. Like, jeez, a put-upon teen loser who gets superpowers and now he’ll show everyone what’s what? No thanks. Oh, and he’ll get the girl, too! Lots of girls! Girls who become supermodels! My eyes. They roll.

I didn’t even really consider a lot of this until I started developing my own fan version. In some ways, I guess it’s good I find it so unappealing. It helps motivate me to make my own comics, you know, so you I can get the version I want. 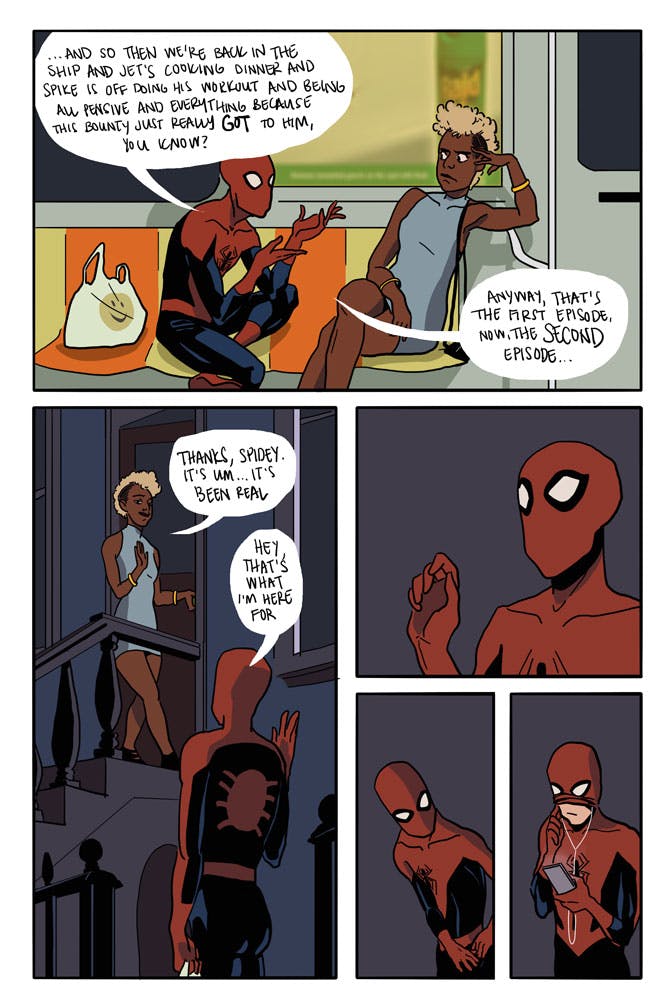 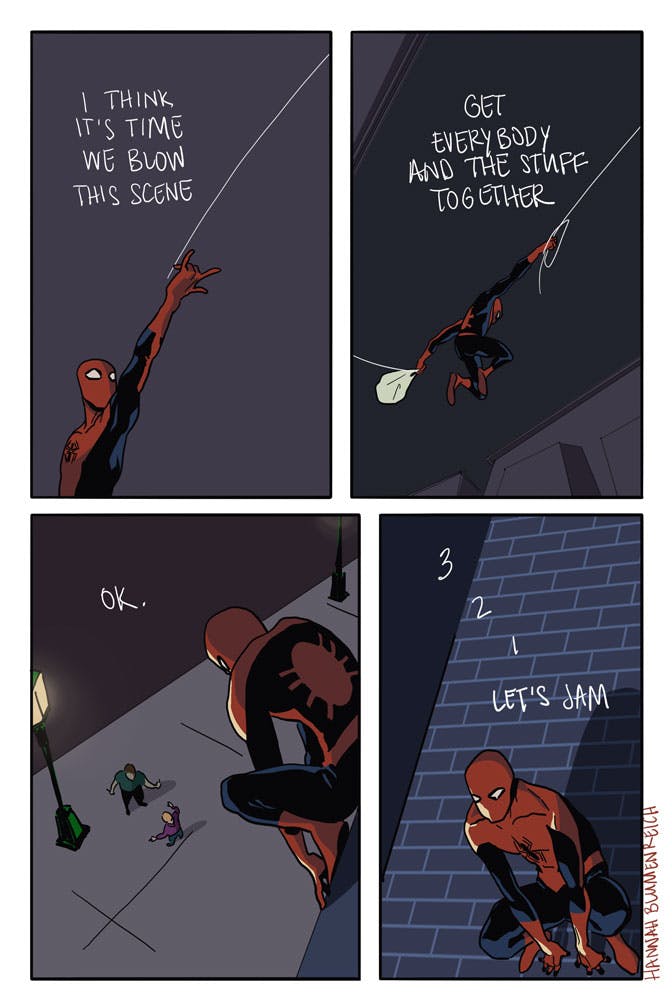 Can people get paper versions of the zine?

[Sure] can! I’m officially not selling them, they come free with purchase of another zine. There’s also a digital download on Gumroad, if that’s more your speed.