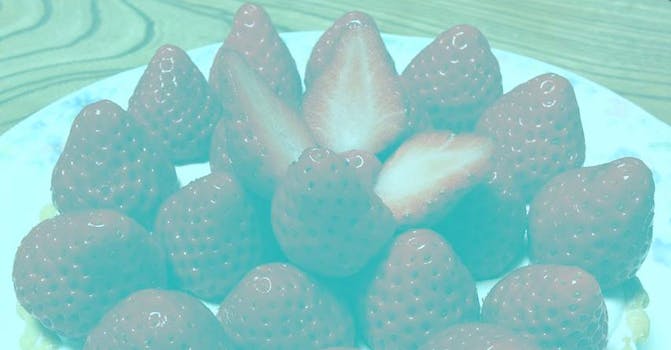 Your brain will trick you into thinking these strawberries are red

Take a look at the above photo. A plate of red strawberries, right? It’s a no-brainer. Well, to borrow the words of our president: wrong.

When our eyes perceive the image as a whole, we see what looks like red strawberries under a bluish-green tint. But in a total #TheDress move, this image is actually made up of only blue and black pixels.

Red Strawberries with only Blue, White, and Black

You might think you’re “seeing” red because you recognize the image of a strawberry and know from previous fruit encounters that strawberries are, in fact, red. But the berries in this image could be bricks and your brain would still play the same trick, no matter how hard you squint.

When you isolate the colors of the strawberry picture into a gradient, it’s clear that the image breaks down into a light blue and gray palette. Our eyes see the remaining white space and our brain tells us “red” by process of elimination.

It’s a concept called color constancy, which has to do with the human color and light perception system. Color constancy is sort of like your brain’s own auto color-correct function—it’s what allows you to perceive that a banana is yellow whether you see it in white light at midday or in dim lighting later at night. It’s also the same concept that made the internet burst into collective flames when The Dress appeared in 2015. That’s right: blame it all on your eyes.

The original image was crafted by Twitter user Akiyoshi Kitaoka, who identifies himself as an experimental psychologist who “studies visual illusions as well as makes illusion artworks.”

Kitoaka also posted an adorable follow-up with the original image of the strawberry cake, which he says his wife made. Don’t squint too hard at that one.

The original image of the strawberry cake. My wife made it. pic.twitter.com/RFRpwsDzEQ