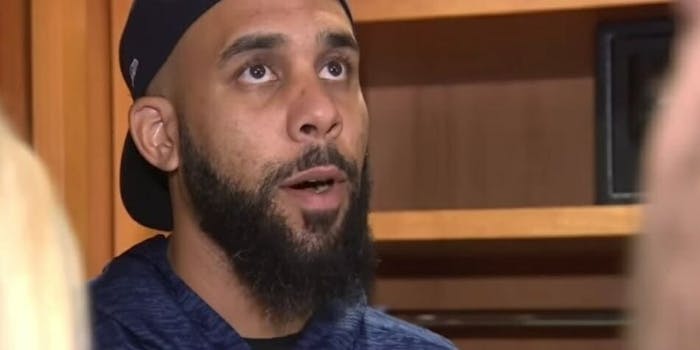 Fortnite gamers might not like that the battle royale game has become so popular in the mainstream. And one of the most well-known players in baseball probably doesn’t like the attention that Fortnite is now shining on him.

Reporters who cover the Boston Red Sox have begun to wonder whether pitcher David Price’s gaming habits have led to him being diagnosed with a minor case of carpal tunnel syndrome. As a result, Price—who has struggled this season and currently sports a mediocre 3-4 record with a 4.89 ERA—said he’s going to stop playing the game.

According to the Athletic, Fortnite has become a bit of an obsession in the Red Sox clubhouse.

“Let’s say we get back at 11pm from a game, we’ll play until 1am, 1:30am, 2am, depending on what time our game is the next day,” Price told the website. “But day games or off days, we can put some time in. We have to make sure, ‘All right we’ve got to eat. Let’s take 30 minutes, eat some lunch, and see you back in 30.’ But you can lose track of time whenever you’re playing it.”

Said Heath Hembree: “I saw everybody playing it and they were addicted to it and I’m like, ‘I’m not going to do it because I get addicted to video games really easily.’ But I gave in and downloaded it and it’s kind of taken over my nightlife.”

The problem with that, though, is that some Boston media have begun to wonder if Price’s gaming habits are causing him physical discomfort that is keeping him from his job. His manager, Alex Cora, said that wasn’t the case, but soon after, Price made an announcement.

Price said he will no longer play Fortnite at the ballpark because he is aware the topic has been a distraction last couple of days.

Even still, it sounds like Price, who managed to pitch on Saturday, still doesn’t think Fortnite is the cause of his carpal tunnel syndrome.

“This is just something that happened over time. This didn’t stem from any one thing,” Price said, via USA Today. “I’m born in 1985, so that’s the video games generation. Being a Red Sox is the least amount of video games I’ve ever played being in Major League Baseball. … I’ve always played video games. I’ve always played it with my teammates, during the offseason, at the field, at the hotel. That’s kind of my generation. That’s what we do. If I need to shut down video games and pick up a new hobby, then so be it. But I do not think that’s the cause.”

He also said, “If that was the cause of the problem, it started back in 1997 when I got my first PlayStation when I was 12 years old.”