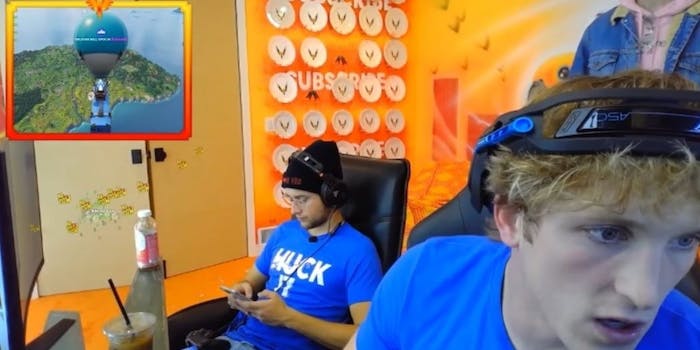 He was immediately met with lewd images.

Logan Paul probably should have predicted this. As soon as the YouTube star announced a few weeks ago that he would begin livestreaming Fortnite on Twitch, joining a burgeoning gaming community that eyes new players with caution, veteran gamers yelled at him on Twitter to “keep your toxic ass on YouTube.”

So, when Paul livestreamed for the first time via Twitch on Sunday, the trolls were prepared for him. As Polygon notes, Paul began his stream a little after 5pm ET on Sunday, and he was immediately besieged by explicit comments and images.

This is what they're talking about. pic.twitter.com/LdGWzaT4kJ

Said one of Paul’s producers on the stream, “There are so many dicks.”

Trolls also tried to trick Paul into saying offensive words. As Metro wrote, users with the names “I_S_Wallow_Cum_77” and “Negros4565” both donated $100 to Paul so he would say their names on his stream.

Paul also said he plans to allow only those who subscribe to his channel, @LoganPaulWasTaken, to comment on his streams to “encourage a healthy chat.” Although he’s streamed only once, Paul already has more than 630,000 Twitch subscribers, and during his stream on Sunday, he reportedly peaked at 200,000 concurrent views, briefly drawing more viewers than the mega-popular streamer Ninja.

But not many people were impressed with Paul’s Fortnite skills.

Let it be known that Logan Paul died within 20 seconds of his first game of Fortnite on stream, with Twitch chat flaming him and posting ascii dicks. He is, previously mentioned, straight garbage at video games. https://t.co/MLZXsxDiQd

You would also think with an entire team of people, he'd be able to avoid rookie streaming mistakes, like playing with the wrong scene up. pic.twitter.com/KQXk9kokuV

I mean in his vlog when he talks about his decision to start streaming he says he doesnt play video games and went out & bought a PC that day. So…yeah he's shit and only in it for fame & money.

How bad was it? As Forbes wrote:

He died within the first few seconds of his first game and got killed by a pickaxe in his second. He lasted a little bit longer in his third thanks largely to some teammates, but the fourth went as quickly as the first. He’s decent at building, however, even if he did spend some time firing on a bush from distance before getting shotgunned. The donations appear to be rolling in regardless, though viewers have been declining steadily throughout the stream. Twitch is a tough platform to succeed on: there’s no editing, unlike on YouTube. It leaves one with few places to hide, either when it comes to video game skill or performance.

The crux of the issue for many Twitch users and Fortnite enthusiasts is that Paul’s presence would be too toxic on the streaming platform. He’s had plenty of issues on YouTube, from filming a dead body in Japan and posting it on his channel to tasering a dead rat, and the site has taken away many of his money-making privileges. Some also believe that Paul has shown interest in Fortnite simply because it’s so popular and because Ninja has said he makes at least $500,000 per month streaming the game.

But Paul is now officially a Fortnite streamer—even if he had a rough debut.

As Paul said during the stream, “At first, I thought, ‘I’m going to be good under pressure.’ But it just turns out … that I wasn’t. Now I’m like super embarrassed … it’s all just super overwhelming.”

Fortunately for him—and unfortunately for all those who can’t stand his presence on Twitch—Paul is unlikely to quit the platform anytime soon. And whether Twitch users want it or not, his presence will continue to draw plenty of attention and derision.