Not sure where to start with Marvel's 'Black Panther' comics? We have a guide for new and old fans alike.

Marvel‘s Black Panther relaunch is one of the most hotly anticipated comics of 2016, bringing together the star creative team of Ta-Nehisi Coates and artist Brian Stelfreeze.

“Black Panther” is the official title given to the monarch of Wakanda, a powerful African nation in Marvel comics. The most famous Black Panther, T’Challa, often joins superhero teams like the Avengers when he isn’t busy with his own solo adventures. Tasked with protecting Wakanda with a combination of superhuman strength and political acumen, he sometimes feels like a solemn figure compared to characters like Tony Stark or Spider-Man. But in the often formulaic world of superhero comics, his struggles and desires are a breath of fresh air.

The first few pages from the new comic look fantastic, and Coates is basically the perfect choice of writer to give Black Panther a fresh start. Known for his award-winning nonfiction writing (Between the World and Me; “The Case for Reparations“), he combines intellectual clout with a deep understanding of Marvel canon.

Coates has made it clear that his comic is completely accessible to first-time readers. You can dive straight in with no background knowledge whatsoever, but Black Panther is such a great character that we decided to put together a reading guide for anyone who feels inspired to check out his back catalogue. Unless otherwise specified, everything on this list is readily available at your local comic book store, Comixology, or the subscription service Marvel Unlimited.

Black Panther made his debut in Fantastic Four #52, cementing T’Challa’s position as a powerful force in the Marvel universe. As the enigmatic king of Wakanda, he dazzles the Fantastic Four with futuristic Wakandan technology including a badass hover-plane and… cell phones. (It was 1966, OK.) 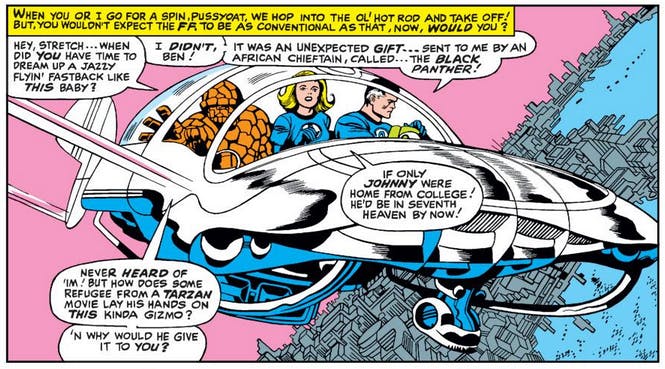 Although Fantastic Four #52 is very much a product of the cheesy, larger-than-life tone of Silver Age comics (and Ben “The Thing” Grimm is straight-up racist), you can already see the basis here for all future versions of Black Panther.

After a few guest appearances in team comics, Black Panther’s first solo run began in Jungle Action. Written by Don McGregor, the 13-issue “Panther’s Rage” was Marvel’s first example of a true longform story arc. The bad news is that it isn’t available online, and the only collected volumes appear to be out of print. So unless you track down individual issues or a secondhand copy of Essential Black Panther Vol. 1, you may be out of luck here.

Quick take: The fun 1977 solo series is worth checking out if you have a Marvel Unlimited membership, while the late ’80s remain Black Panther’s lost years.

Opening with a story by Marvel icon Jack Kirby, Black Panther Vol. 1 really embraced the psychedelic style of many late-70s comics. As in, issue #1 begins with T’Challa getting into a fight over a magical, time-traveling frog ornament. The energetic action/adventure tone makes it a good choice when introducing Black Panther to the younger kids in your life. You can find the entire run on Marvel Unlimited.

Like “Panther’s Rage,” the Black Panther comics of the late ’80s are hard to access unless you collect individual issues. A 1988 miniseries saw Black Panther grapple with apartheid-era racism in the fictional African nation of Azania, followed by Don McGregor returning to write “Panther’s Quest” in 1989, paving the way for the character’s modern relaunch in 1998.

Quick Take: This modern revamp is an important moment in Black Panther canon, although its storytelling style isn’t for everyone.

Christopher Priest’s relaunch is widely beloved for introducing a more contemporary and realistic tone to Black Panther, but he uses a framing device that some readers may find grating. By telling the story from the perspective of a U.S. government agent named Everett K. Ross, it can sometimes feel like T’Challa is a side character in his own book.

The 1998-2003 series began with the six-issue storyline “The Client,” depicting T’Challa on a diplomatic mission to the U.S. In Priest’s own words, he used Ross to “bridge the gap between the African culture that the Black Panther mythos is steeped in and the predominantly white readership that Marvel sells to.” Compared to T’Challa’s strength and regal calm, Ross comes across like a motor-mouthed Jar Jar Binks. Still, this volume remains one of the cornerstones of the Black Panther canon.

Quick take: The ultimate introduction to T’Challa and Wakanda, including a fresh retelling of his origin story.

When Reginald Hudlin took over as Black Panther’s lead writer, he went back to basics. Illustrated in John Romita Jr.’s distinctive style, the six-issue “Who is the Black Panther?” provides a definitive retelling of T’Challa’s origin story, reintroducing characters like T’challa’s sister Shuri and the villain Ulysses Klaw before segueing into a present-day adventure.

“Who is the Black Panther?” is an excellent choice for new readers, exploring T’Challa’s strength and skill as a leader, his personal relationships at home, and the defensive paranoia he inspires among politicians in the West. Basically, it’s the perfect balance between the adventure stories of the ’70s, the badass attitude of the ’90s, and the weightier political storytelling that would take over T’Challa’s character arc in the 2010s.

This series continued for three years, encompassing the momentous Civil War crossover event, much of T’Challa’s romance with Storm of the X-Men, and the fantastic “See Wakanda and Die.”

Quick Take: One of the best Black Panther stories to date. Highly recommended, and only three issues long.

“See Wakanda and Die” is the holy grail of crossover event comics. It ties into Marvel’s “Secret Invasion” storyline, but you don’t need to read any other books to follow it (unlike the Civil War tie-ins, which require more background reading). Written by Jason Aaron, it’s a fantastic character piece for T’Challa, his wife Storm, and Wakanda itself.

In the midst of a global invasion from the shapeshifting alien Skrulls, Wakanda stands strong. T’Challa is at his best: powerful and cool, and doing everything he can to protect his people. Jefte Palo and Lee Loughbridge’s art creates a gloomy, operatic tone, with gorgeously kinetic fight scenes between the Skrulls and the Wakandan army. It’s also one of the most strongly Afrofuturist stories in Black Panther canon.

After T’Challa is grievously wounded, his sister Shuri takes over as the monarch of Wakanda, leading to an awkward period of political upheaval. Even after he recovers, Shuri continues to perform the official duties of the Black Panther while he lives in voluntary exile in New York, replacing Daredevil as a street-level crimefighter. 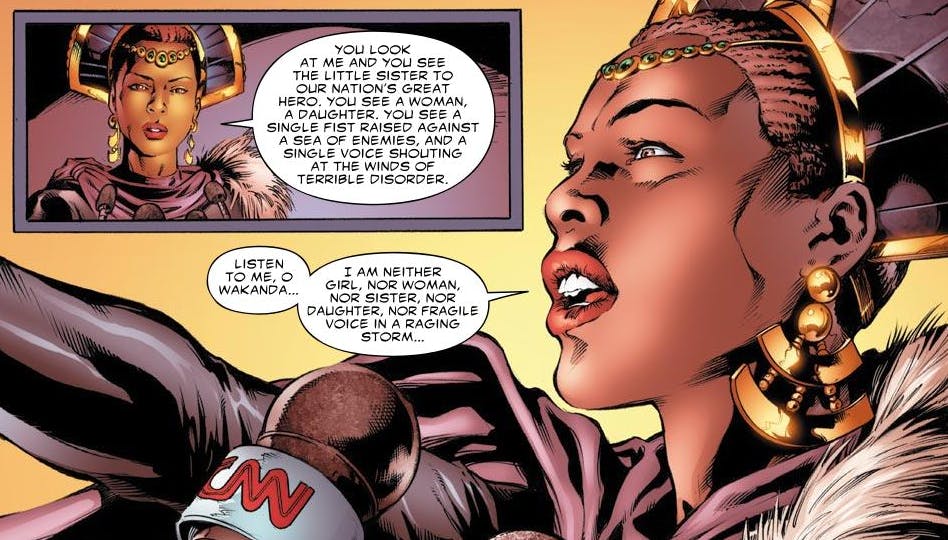 Taking place shortly after Shuri’s ascension to the throne, T’Challa’s “The Man Without Fear” arc has the noir mood of a Daredevil comic. It may not appeal to fans who prefer to see T’Challa as the awe-inspiring leader of Wakanda, but it’s an excellent self-contained graphic novel in its own right, following T’Challa as he comes to terms with his (obviously temporary) civilian identity.

Quick Take: This is where things get complicated. We recommend Jonathan Hickman’s 2013 New Avengers, followed by the main “Secret Wars” series.

Black Panther’s last solo comic ended in 2012, so T’Challa and Wakanda have only appeared in group titles like Avengers and The Ultimates since then. To complicate matters, the Marvel Universe went through multiple crossover events in the 2010s.

This period includes several major plot-twists for Black Panther (Namor destroys Wakanda in Avengers v. X-Men #8, T’Challa kills Namor in Avengers #40, and Storm and T’Challa annul their marriage), but these storylines are entrenched in complex, world-spanning arcs. For a quick storyline you can drop in for T’Challa’s two-issue role in Fantastic Four #607-#608, but otherwise we recommend Jonathan Hickman’s New Avengers as the clearest way to follow T’Challa’s personal journey in one volume. 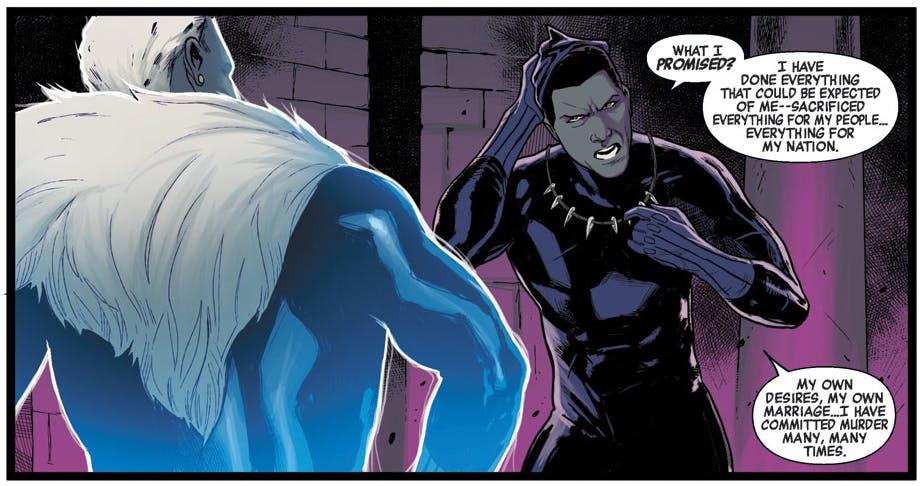 New Avengers is a serious, political comic—not in the sense that it deals with social issues, but more that it focuses on the politicking between the Illuminati, a cabal of powerful men including Black Panther, Namor, Doctor Strange, and Tony Stark.

As the Illuminati try to prevent a series of apocalyptic collisions with alternate Earths, T’Challa wrestles with the moral conflict of saving Wakanda by destroying other worlds. Issue #21 is an interesting one to pick up if you don’t have time for the whole book, focusing on a theme that will undoubtedly show up in Coates and Stelfreeze’s upcoming comic: “Uneasy lies the head that wears a crown.”

New Avengers neatly leads in to Secret Wars, the massive 2015 crossover event that took all of Marvel’s concurrent timelines, “destroyed” them, and rebooted the whole thing with a clean new line of continuity. During this time, most characters were transplanted to an alternate world ruled by Doctor Doom, with a handful of heroes leading a rebellion to restore the universe to its previous state. 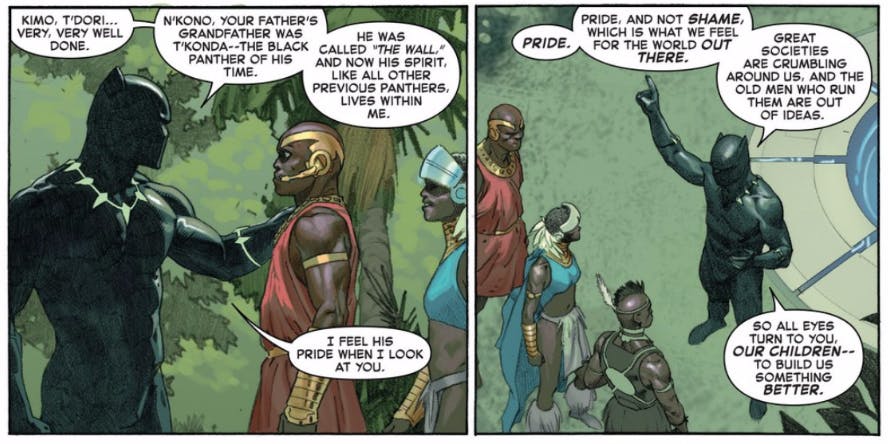 Secret Wars is precisely the kind of epic, clash-of-the-titans storytelling at which Hickman excels, and Esad Ribi?’s detailed, atmospheric art is truly stunning. Although it’s a team book with a slight emphasis on Doctor Doom and the Fantastic Four, T’Challa plays a major role—especially in the grand finale, issue #9. It ends on the perfect note to launch into the new Black Panther comic, with Wakanda reforged anew, ready and waiting for a new generation of readers to arrive.