If you were traveling through time or enjoying an epic adventure with dragons, what type of alcoholic beverage might you drink at the end of the day to recount your exploits and relax with your fellowship?

It just might be one of the creative liquors the husband-and-wife team at Binary Winter Press created, incorporating unique science fiction and fantasy labels as part of their new apparel line Speculative Spirits.

Illustrator Cody Vrosh and writer Sheatiel Sarao recently launched a Kickstarter to fund the line, which would include T-shirts and neckties featuring the creative labels.

“It started as a story idea,” Vrosh told the Daily Dot. “I was telling Sheatiel about the process of distilling whiskey and how long it takes to age, which of course led to her talking about time travel. She came up with the idea of The Time Traveler’s Whiskey, in which a young woman hops time to craft the finest whiskey.”

According to Sarao, this led to the couple thinking it’d be fun to add a geeky twist to other liquors, which would be perfect for a themed collection, something they’d wanted to create for some time.

“We continued with the storytelling approach for the rest of the designs and basically used booze as a writing prompt,” she said. “We researched vintage liquor labels and the histories of all the different spirits, and extrapolated from there. For example, Absinthe was a favorite drink in the late 19th, early 20th century amongst writers and artists who sought its hallucinogenic effects to induce lucid dreams and unlock their creativity. We thought it would be neat if in the future, a version was created just for androids, artificial intelligences that don’t have a subconscious mind so they can’t dream but still want to experience what it’s like.” 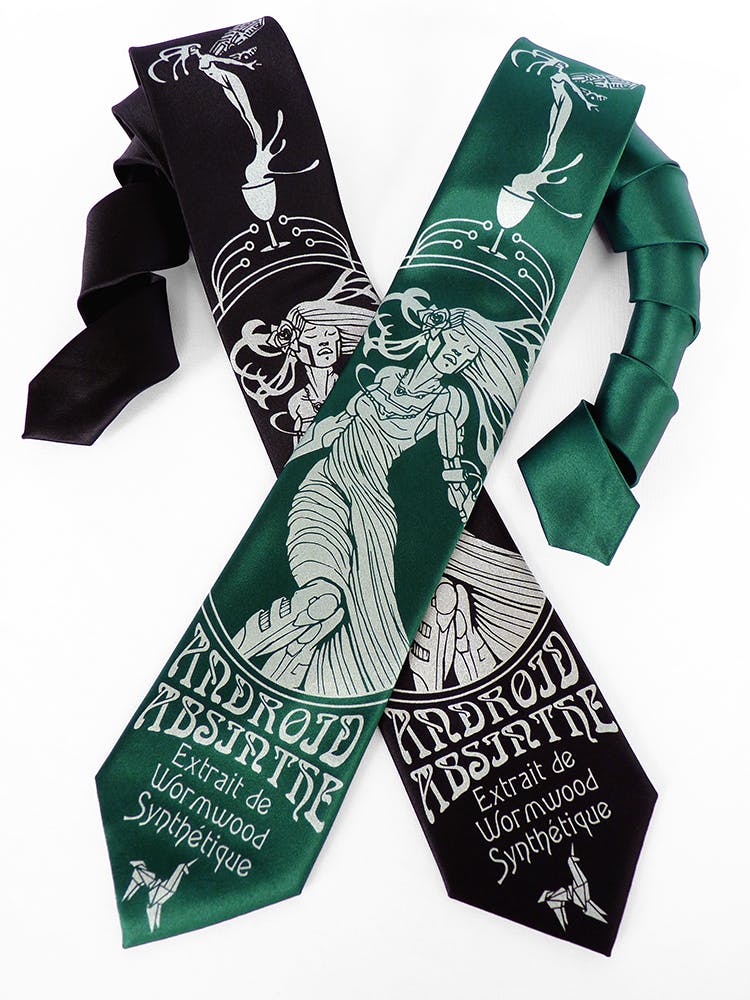 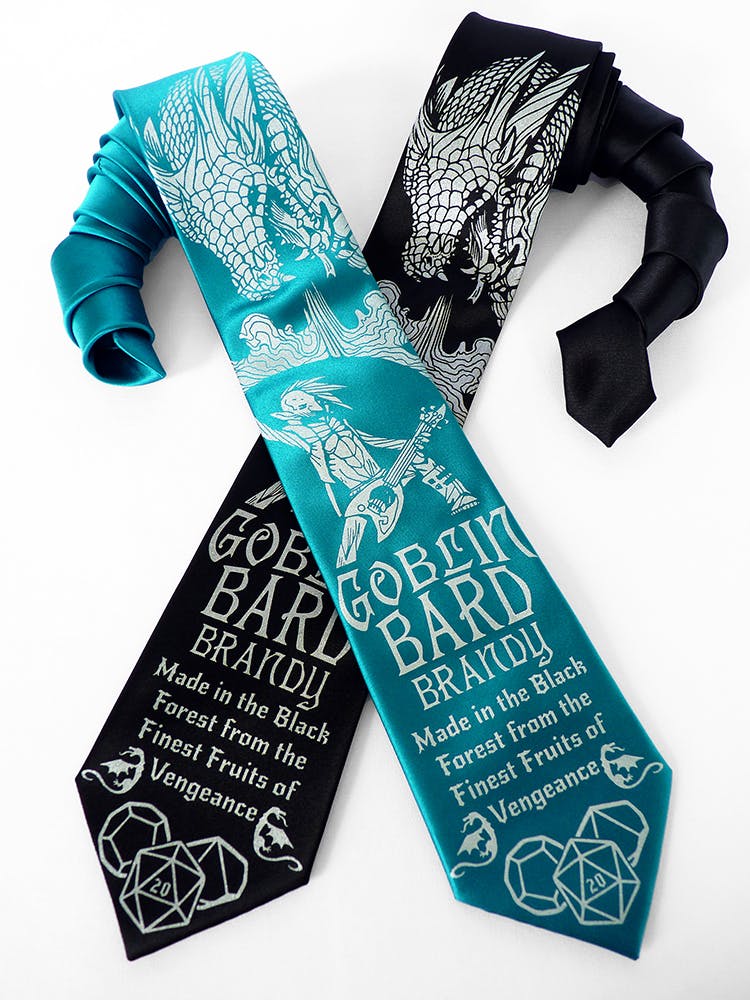 If funded, the Speculative Spirits collection would include six liquor label designs for Space Pirate Dark Matter Rum, The Time Traveler’s Single Malt Whiskey, Goblin Bard Brandy, Robo Bear Revolution Vodka, Tequila de los Muertos, and Android Absinthe. Shirts would be made for both men and women and, along with the microfiber satin neckties, would be screenprinted by hand. All of the art is created by Vrosh and features label wording that captures the essence of each fictional liquor.

“I wanted to convey as much story as I could into each label illustration, so you get a sense of the worlds we created for our fictional liquors, the distillers that make them, and maybe even hints as to who would enjoy an imaginary glass,” he said. 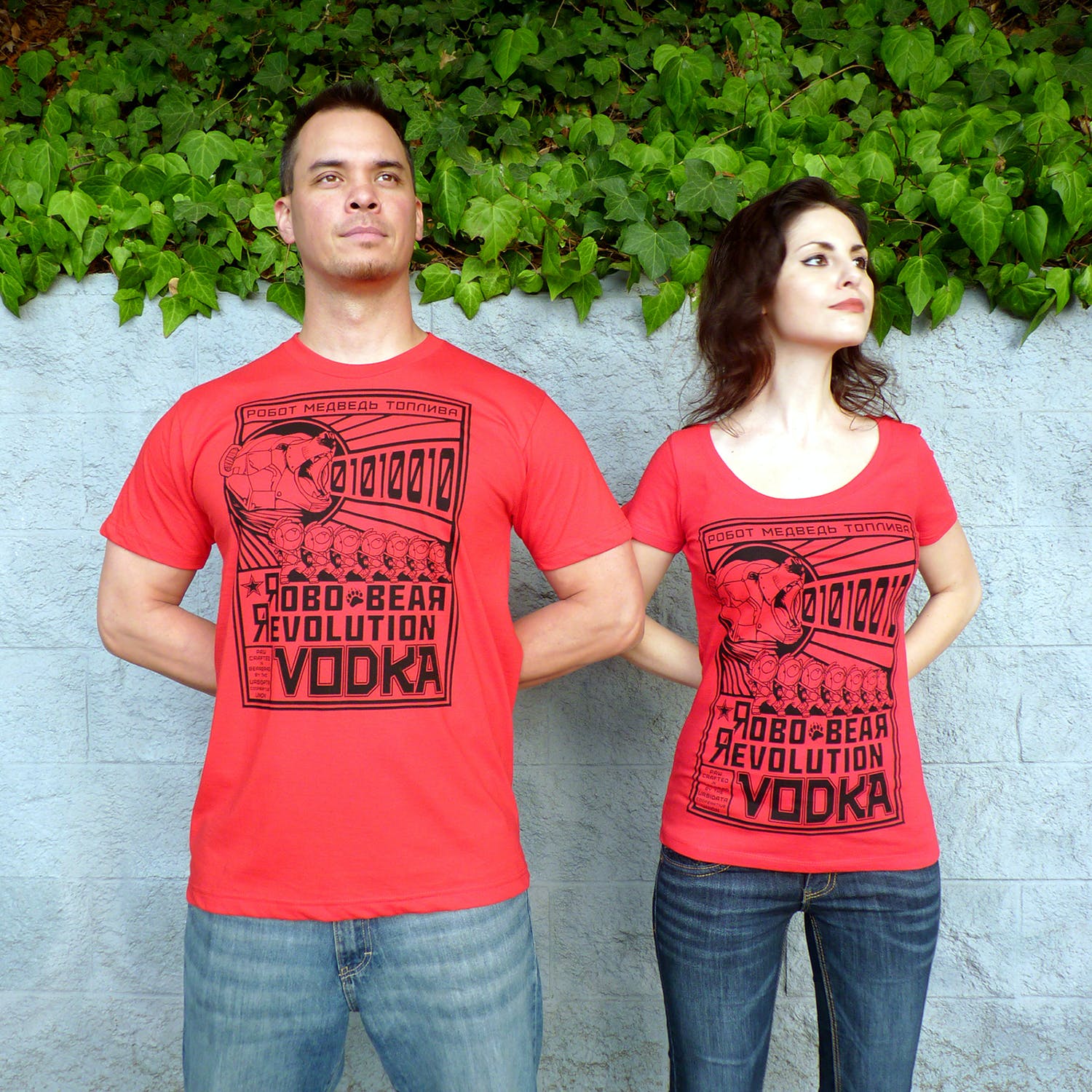 “For vodka, I just had to do a Constructivist design,” Vrosh said. “Russia has very rich folklore for a fantasy angle, but I thought a futuristic setting would fit better with the Constructivist style. Since the bear is such a symbol for Russia, we decided on Robo Bear Revolution Vodka. The design being propaganda for the great robot bear labor uprising.” 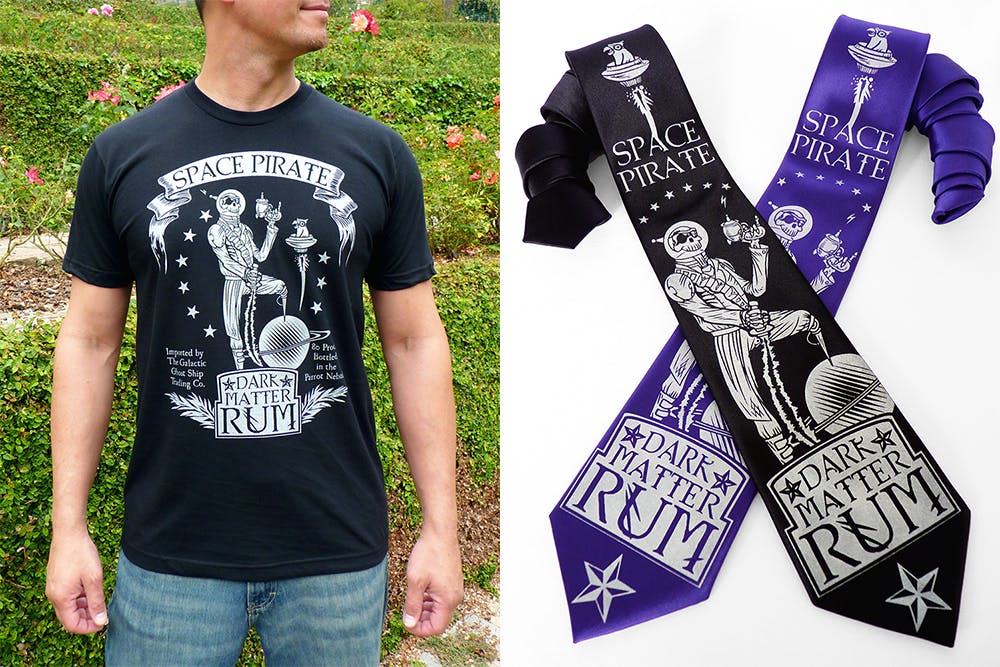 “Space Pirate Rum was probably the most intuitive,” Vrosh explained. “What do you associate with rum? Pirates. What’s better than pirates? Space pirates. What kind of rums are there? Spiced? Light? Dark? Dark matter! Space Pirate Dark Matter Rum! The story and subsequent parrot jokes follow.”

This is the third Kickstarter run by Binary Winter Press. Their last campaign successfully raised funds for the creation of a book called The Android’s Astrological Companion. They decided to use Kickstarter again because they were having supply problems with their blank shirt and tie makers.

“Having all your eggs in the same basket can be a really dangerous thing for a small business,” Vrosh said. “We thought the new collection would be a good chance to branch out and incorporate some new styles and brands. But as we added up the costs for each new style and the various colors and sizes we’d need to launch an entire collection all at once, we realized the amount was quickly growing and so we decided to turn to crowdfunding for help.” 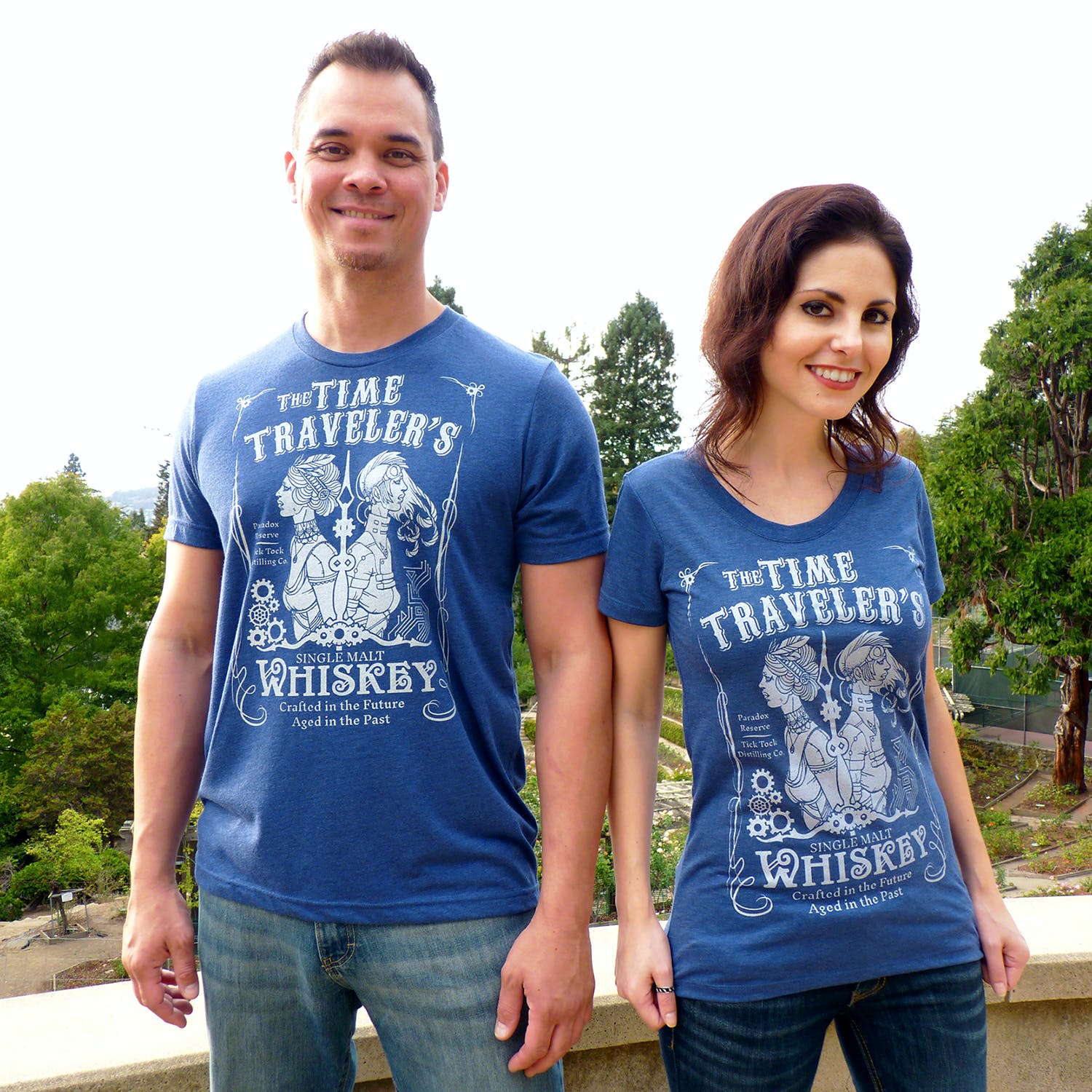 The campaign is asking for $5,000 to fund the line and so far has raised more than $1,940. Vrosh said the line was fun to work on and the couple “wanted to share it like you would a nice bottle of whiskey. The more people with a full glass the better.”

You can find out more about the creative Speculative Spirits apparel line on Kickstarter.