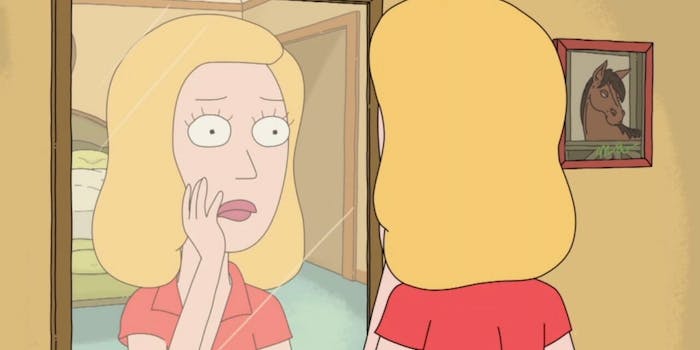 Is Beth from ‘Rick and Morty’ a clone? An investigation

Is she or isn't she?

Warning: This article contains spoilers from Rick and Morty season 3.

On Rick and Morty, it’s sometimes tricky to parse through dimensions and to tell which Ricks and Mortys are which. However, one of the many mysteries at the end of season 3 is a different matter altogether: a question of someone’s very reality.

At the end of “The ABC’s of Beth,” Rick offers to clone his daughter Beth—who’s exactly like her father—so that she can discover who she is without having to worry about everything she left behind. The clone will stay behind to do her job, take care of her children, and even watch The Bachelor for her. Then she’ll disappear once the real Beth decides to come back with the promise that her clone “has zero chance of going Blade Runner.”

Beth’s eventual choice is purposely left ambiguous so that the audience is forced to choose a side for themselves.

Instead of ignoring it or not picking it up until season 4, Rick and Morty returned to it in the very next episode, “The Rickchurian Mortydate.” Although everything seemed to be coming up for Beth at first, she soon found herself in the midst of an identity crisis as she asked herself (and her father) if she was the clone that the real Beth left behind so that she could go on adventures. Even by the end of the episode, she still wasn’t quite convinced that she was real, even after she had settled back into her old/new life reunited with her ex-husband Jerry.

And as it turned out, some viewers were still torn.

So what’s the deal, anyway? Do we have an instance of Schrödinger’s Beth in a way—she’s real and she’s the clone—or do we already know? And if Beth is the clone, what happens when the real Beth, who might not have reunited with Jerry, comes back?

Beth is a clone

There’s no beating around it for fans who buy into the idea that the Beth Smith we see at the end of “The ABC’s of Beth” and the season 3 finale.  There’s just something different about the Smith matriarch. And they can’t chalk it up to her finding peace with herself.

They took her absolute chillness as a sort of reset. Even with the fragments, we see this Beth has a much better relationship with Summer than she previously did; she’s not able to handle Summer’s heartbreak, which led to Summer accidentally enlarging herself earlier in season 3.

When she does have her mental break later in the episode, Rick took the time to convince Beth—while trying to forge peace between Israel and Palestine—that she wasn’t a clone. (Even though he previously told her that a clone wouldn’t go all Blade Runner on anyone, that could be a lie.) And curiously enough, Beth flat-out asked Rick if he would ever tell her she was a clone but he avoided answering it altogether. Her added confusion led to her seeking out Jerry’s help (something the real Beth probably wouldn’t do in earlier episodes) and them getting back together to Rick’s chagrin. After all, getting Beth to kick Jerry out of the family was part of why he went to space prison!

And as we saw briefly in season 1, it’s not the first time we’ve met a clone of Beth. In the first scene of season 1’s “Meeseeks and Destroy,” Rick and Morty are being chased by clones of Jerry, Beth, and Summer from “an alternate reality possessed by demonic alien spirits from another dimension’s future.” The evil clone of Beth attempted to appeal to Morty by being nice and telling him that she loved him. That’s what convinced Morty to destroy the clones, although he felt horrible about it afterward.

Beth is not a clone

Are fans over-scrutinizing Beth’s change of heart after figuring out who she is? Maybe!

After all, it’s possible that she finally made peace with herself and learned to appreciate her family again after the photos on her fridge showed what she would be leaving behind; one fan even believed the magnets were trying to spell out—albeit in a very abstract way—the word “stay.” Apart from Rick’s word that Beth is real—which to be fair, isn’t always all that trustworthy—he never attempts to kill her. His final question to Beth during their phone conversation about whether she’s a clone is about if she’s convinced she’s a clone.

“And just to be sure, you’re not pretending to be convinced you’re real because you’re actually convinced you’re a clone and you’re now terrified that becoming self-aware would mean I’d have to terminate you?”

If Beth was a clone who became self-aware, what would stop Rick from killing that clone and replacing her with a new one? He knows that Beth is smart and very much his daughter, so it would make sense for him to be prepared for at least one version of said clone to fall out of line. And as for Jerry? It’s not the first time she’s returned to her estranged and mediocre husband.

Besides, Rick never tries to kill this Beth. The gun he brings with him to the Smith family’s secret hideout is meant for Jerry instead.

At the end of “The Rickshank Rickdemption,” Rick’s rant became well-known because of his obsession with McDonald’s Szechuan sauce, but it wasn’t the only thing he rambled about to Morty. He took out Jerry because Jerry had crossed him, and with Beth and Jerry getting a divorce, Rick could become the “de-facto patriarch” of Morty’s family.

“I just took over the family, Morty!” Rick exclaimed. “And if you tell your mom or sister I said any of this I’ll deny it and they’ll take my side because I’m a hero, Morty! Now you’re gonna have to go and do whatever I say, forever!””

Except that by the end of season 3, Jerry managed to find his way back into the family anyway. Rick conceded that “no amount of genius can stop your dumb mediocre vacuous roots from digging into everything and everyone around you and draining them of any ability to fend you off.” He didn’t plan to stick around as everyone essentially settled back into their season 1 selves, but we wouldn’t be surprised if Rick refuses to let go.

In the end, it might not matter if Beth is a clone because, despite everything that happened, this Beth chose Jerry over him.