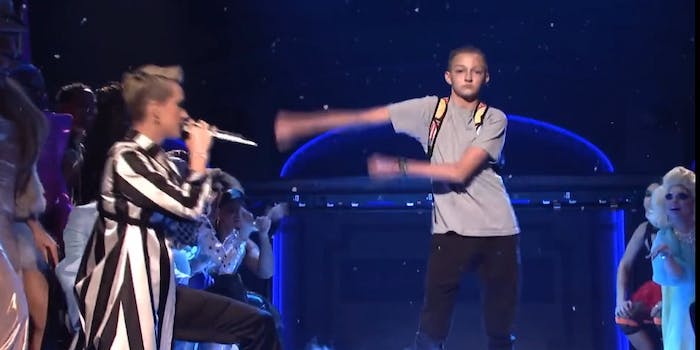 Russell Horning, known to the internet as Backpack Kid, claims Fortnite developer Epic Games used the “flossing” dance he made famous without his permission, Polygon reports.

Horning’s viral fame came after he shared videos of himself doing the dance move on Instagram. His clips led to several event performances, including alongside Katy Perry on Saturday Night Live when he wore the backpack he’d become known for.

The insanely popular battle royale game Fornite has an emote called “The Floss” that is unmistakably similar to Horning’s signature dance. Horning may struggle to legally prove ownership as he does not own the dance’s copyright, but he’s filed for a patent.

In an interview with TMZ, Horning said his mother and management were the ones pushing for a lawsuit. “I’m just letting the adults do all the busy work,” the 16-year-old told TMZ. “Me, personally, I don’t really care about the money like that.”

He’s suing Epic at the same time as other celebrities, including Ribeiro for his “Carlton dance” and 2 Milly for his “Milly Rock.” Unlike the other performers, Horning has participated at Fortnite events run by the company in the past. He played alongside other internet stars like Ninja and Marshmello in June at the game’s E3 Pro-Am.

Back then, he told TMZ he didn’t mind Epic using his signature moves. “It’s not that big a deal, I’m just glad it’s in the game,” he said at the time.