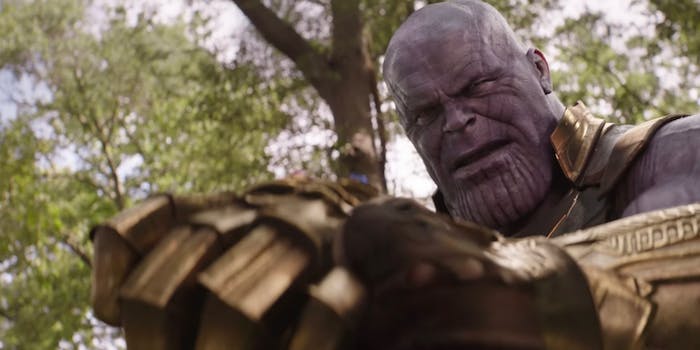 The Russo Brothers shut down your ‘Avengers’ Soul Stone theory

The end of Avengers: Infinity War saw Thanos leave a trail of dust at his feet as he snapped half the universe out of existence. And while fans are trying to figure out just how some of the departed heroes will return, the film’s directors appeared to have ruled out one possibility.

Most fans figured that the numerous hero deaths—like Spider-Man, Black Panther, and most of the Guardians of the Galaxy—won’t be permanent. The characters who died earlier in the movie are more likely to stay that way. Gamora, however, has been something of a wildcard for fans. Her death took place prior to Thanos completing his Infinity Gauntlet, but under unique circumstances: Thanos sacrificed her and threw her off a cliff to obtain the Soul Stone.

After Thanos completes his task, he briefly wakes up in an orange-tinted room and finds a young Gamora, who asks him if the sacrifices were worth it. The area, along with Gamora’s appearance, made fans believe that they were seeing the Soulworld and that Gamora’s soul was actually trapped in the Soul Stone.

During a recent Q&A that took place at an Iowa high school, Avengers: Infinity War co-director Joe Russo appeared to confirm that Thanos was in the Soul Stone during that scene—and the person he countered was a younger Gamora.

“She is in fact, yes…it was an attempt an attempt on our part—because we don’t like two-dimensional roles or three-dimensional villains, every villain is a hero in their own story,” Russo told the crowd. “And as insane and psychotic and brutal and violent as Thanos is, he’s a more complex villain if you go on a journey with him emotionally. He does care for things and it is complicated for him to execute his plan and it cost him something. He said at the end ‘It cost him everything’ and that it was the only thing he loved which was Gamora which is why we put him back with her at the end. I just want to reiterate with the audience that he does feel true emotion even though he is a monster.”

When the quote first emerged, it made it appear that Gamora’s soul was trapped in the Soul Stone (akin to Adam Warlock in the comics) and that the Avengers could potentially free her in the process of attempting to reverse Thanos wiping out half the universe.

However, Russo is now walking back the insinuation that the person who Thanos saw within the Soul Stone was Gamora, instead characterizing what Thanos saw to Comicbook.com as a “spiritual representation of her.”

“The power that it took Thanos to click his fingers, he’s so dramatic that if you look closely at the film and the damage of the gauntlet. You look closely at the very last scene, it damages his arm dramatically. And that moment when he clicks his fingers sends him into this ethereal plane inside of the Soul Stone where as part of his quote unquote hero’s journey in the film, he has one last moment to convey a sense of guilt about what he’s done. It illustrates what a complicated character he is. So, to clarify, it’s a spiritual representation of her and obviously that’s something that the Soul Stone has power to do. But really it’s there to illustrate his pain and his guilt. I wouldn’t read much more into it beyond that.”

For now, Russo’s comments appear to put a damper on the possibility of Gamora coming back in Avengers 4, suggesting that she might be dead for real. There’s always the possibility of her death being reversed in some other way or that her soul is in the Soul Stone (but has yet to be seen). But as some fans already know, those involved with the movie are prepared to insist that dead characters with sequels aren’t coming back for a full year.