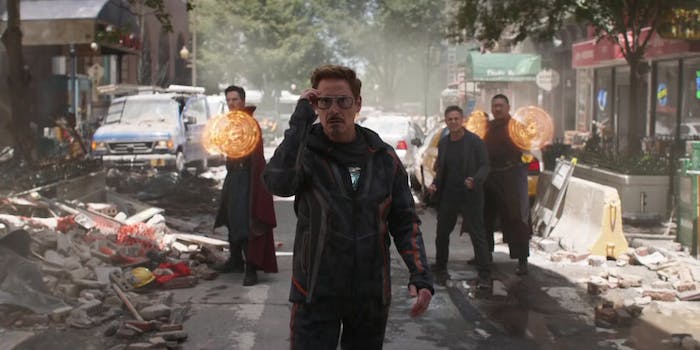 Marvel rolled out its first Avengers: Infinity War preview screenings Monday night, and you know what that means: The spoilers have arrived.

Of course, Marvel fans and filmmakers alike have been bracing for this moment. After weeks of asking fans not to share spoilers ahead of the film’s Thursday night U.S. debut, Avengers: Infinity War directors Anthony and Joe Russo tweeted one final warning. The (now deleted) post read, “Tonight, at our premiere in Los Angeles, we are screening ‘Avengers: Infinity War’ in its entirety for the first time ever. If you truly want to avoid any spoilers until you see the film, we recommend you abstain from any social media, or the Internet in general, until you have an opportunity to get to the theater.”

The post was accompanied by the hashtag #ThanosDemandsYourSilence, which Marvel has been circulating since April.

To ensure ALL our fans experience the film first hand in theaters, please don’t spoil the movie for others. #ThanosDemandsYourSilence pic.twitter.com/f4QcsieISu

The intense focus on spoilers suggests that Marvel’s latest megablockbuster is full of them. We won’t spoil anything here, but fans who don’t mind ruining major surprises and plot points for themselves have been giddily spelunking through spoiler threads all morning. Fortunately, many of them seem to be cooperating in keeping the secrets contained. On Twitter, there are more people talking about not spoiling the movie than there are people actually sharing spoilers. (Spoilers are definitely out there, though, so use caution.)

STAY AWAY FROM SPOILERS.

DO NOT HAVE AVENGERS: INFINITY WAR SPOILED FOR YOU. THIS IS NOT A DRILL.

Just muted a ton of words so I don’t see any spoilers about Avengers Infinity War.. let me know if I should add anything pic.twitter.com/UC36PbFM3w

Jaw on ground. You are not ready for 'Avengers: Infinity War'. All you have to know is AVOID ALL SPOILERS! Seriously. Go in knowing as little as possible. The @Russo_Brothers did the impossible. Wow. pic.twitter.com/noKZ5cQWdc

Of course, the balance could tip once more people see the movie. Avengers: Infinity War is already predicted to have a massive opening weekend, with industry watchers expecting Infinity War to surpass Black Panther ($202 million) and The Avengers ($207 million), and possibly even catch up to Star Wars: The Force Awakens, which boasts the top opening weekend ever at $247 million.

With all of those movie fans flooding theaters, staying spoiler-free could get a lot harder in the coming days. If you’re really dedicated to staying unspoiled, it’s worth setting up some Twitter filters and being cautious about what sites you visit ahead of your screening. Also, if you’re worried, just see the movie as soon as possible. That’ll let you get in on the huge online discussion without ruining anything.