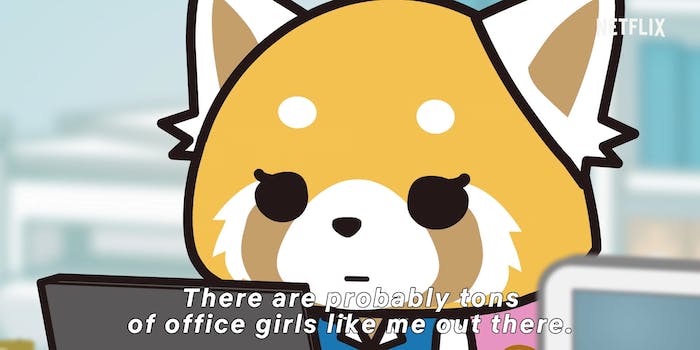 Netflix’s new original anime ‘Aggretsuko’ is ‘it me’ TV

Sanrio's relatable millennial character has her own show.

When you think of Sanrio you probably think of Hello Kitty, which means you’re probably familiar with her flower-filled world, overflowing with hair bows, cookie baking, and colorful balloons. The company’s newest heroine, Aggretsuko, is definitely a departure from her foremother, and in her new Netflix series, she does her best to relate to a slightly more cynical generation.

The new original anime, out April 20, follows the life of Retsuko, a young professional red panda trying to make it in the big city. She’s “single, a Scorpio, blood type A” with a demeaning office job and two obnoxious supervisors, but she also has a secret: She has a death metal karaoke persona—an aggressive Retsuko, if you will—Aggretsuko. In other words, angry is the new cute.

The first season introduces you to the chipper, agreeable office assistant as she struggles to reconcile her ambition with the soul-crushing nature of her day-to-day life. She wants to make it to the top like the executives she sees at her yoga class, but in the meantime, she’s just a regular entry-level worker, fighting it out for a seat on the train and forgetting to change out of her slippers in the morning. Retsuko only truly lets her millennial ennui hang out when she has the karaoke mic in her hands.

Sanrio does an amazing job of turning their sweet, cute red panda into a walking meme as she transitions to her metal self. Her eyes glow with corporate rage as she screams out her life’s frustrations. Sometimes she does this in true karaoke-seeming settings after work, and other times she sneaks away to the office bathroom to blow off a little steam. Like any good millennial, she has a group of friends navigating their own similar concerns and trying their best to give her good advice. But also like any good millennial, she still feels like her problems are a little more intense than everyone else’s.

Aggretsuko‘s digestible, 20-minute episodes make it super easy to binge in one sitting, but it’s tough to say who exactly the show is for. The subject matter is definitely geared toward 20-somethings and the teens who are interested in them, but the dialogue is much more like a children’s show. Some of the simplicity might be because the English subtitles aren’t doing justice to the Japanese scripts, but Sanrio might also hope to appeal to as wide an audience as possible. The four-episode first installment makes it tough to say for sure, but that failure to fully get pissed off might be the show’s stumbling point. As she rages about her boss’ sexism and her friend bailing on their plan to open a store together, Aggretsuko touches on the “it me”-ness that other Netflix successes like BoJack Horseman have mastered so well, but it doesn’t quite dive in all the way. More often than not, Retsuko is, in fact, still very cute—and hoping to succeed in a culture that demands she act a certain way. Will she solve chauvinism? Should we expect her to? Probably not. But since the topics get touched upon, you can’t help but want her to engage in them a little more beyond simply screaming, buttoning herself back up, and then getting back to work.

Ultimately, the show is an ambitious and funny swing at an original anime for Netflix. As a programming decision, it’s super cool to see youth-oriented cartoons about actual problems an adult woman might face. As the show develops, hopefully Retsuko will get to explore the complexity of her feelings a little more. Even if she doesn’t, Aggretsuko is fun to check out.