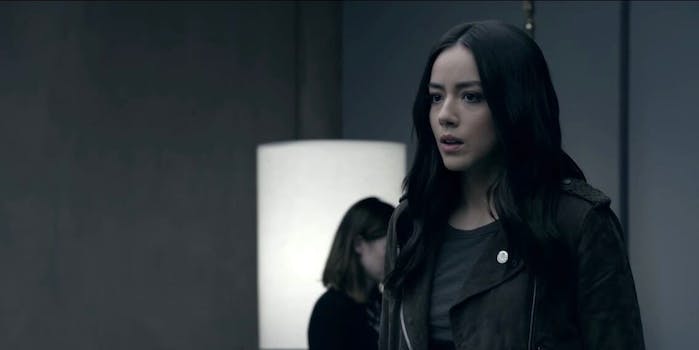 ‘Agents of S.H.I.E.L.D.’ has a clear answer to Marvel’s Hydra–Nazi debate

The MCU's stance arrives in the midst of a comics debate.

Warning: This article contains minor spoilers for the latest Agents of S.H.I.E.L.D. episode, “What If.”

Comic fans have debated for months about whether Captain America is a Nazi after Captain America: Steve Rogers revealed that out beloved Cap was a secret Hydra agent the whole time. The Marvel Cinematic Universe, meanwhile, has a much more definitive statement on the matter in the latest episode of Agents of S.H.I.E.L.D.

For those who keep up with the MCU, Hydra was introduced in Captain America: The First Avenger as being aligned with the Nazis during World War II. They later infiltrated S.H.I.E.L.D. over the years, which came to a head in Captain America: Winter Soldier. Agents of S.H.I.E.L.D. explored the subsequent fallout, and Daisy Johnson (then going by Skye) plainly stated in the show’s first season where S.H.I.E.L.D. agents stood on the matter: Hydra are Nazis.

While Hydra’s origin story in the MCU—going back thousands of years to an Inhuman on a far-off planet accessible by portal—transcends its Nazi association, it’s still a relevant connection.

In the episode “What If,” the beginning of S.H.I.E.L.D.’s latest arc, all of the major characters are placed into the Framework, a digital utopia designed by Dr. Radcliffe to remove painful memories, which results in Hydra seizing control. Daisy and Jemma Simmons are the only characters who have retained memory of the real world from the get-go, so Jemma is in her right mind when she tells a teenager what Hydra really is: a bunch of Nazis. And as a full-fledged S.H.I.E.L.D. agent who was probably taught Hydra’s history as part of her training, she would know.

This version of Hydra in the Framework feeds into the idea that they are Nazis, even though they will whitewash their own history as evident with Phil Coulson teaching students that Hydra aren’t Nazis because the organization predates the Nazis. Hydra agents round up and torture Inhumans (which can be determined by a blood test), and everyone must carry identification at all times or are immediately suspect. Not to mention the propaganda posters Marvel put out to tease the new arc. S.H.I.E.L.D. is pretty firm on declaring Hydra as Nazis.

In the Framework, allegiances will be shifted. Prepare for a new world order. #AgentsofSHIELD

While an event that occurs in the MCU doesn’t make it canon in the comics (or vice versa), it does explain the reluctance of some Captain America fans to accept Cap’s story arch in Captain America: Steve Rogers (especially when he once famously punched Adolf Hitler in the face.) Captain America: Steve Rogers writer Nick Spencer argued that although Hydra was once associated with Nazis, it’s really an apolitical organization. But many comics fans saw making Hydra agents of Steve Rogers—an anti-fascist hero created by Jewish cartoonists—and possibly even Magneto, a Holocaust survivor, as an insult and slaps to the face of the characters’ legacies. Hence the months-long debate.

The MCU, however, has a pretty firm stance on it. Despite its origins, Hydra is forever linked with Nazism.