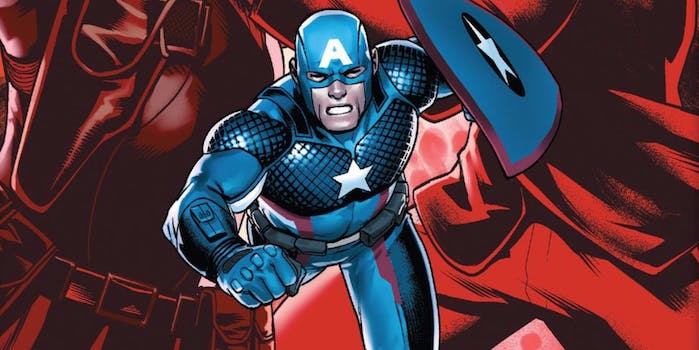 Last month, Marvel revealed that Steve Rogers was a Hydra agent. Issue #2 adds another layer to that plot twist.

Remember when Captain America was revealed to be a secret Hydra spy? It feels like an age ago, but it was just last month that Marvel launched Captain America: Steve Rogers with this monumental plot twist.

When issue #1 showed Steve Rogers uttering the infamous catchphrase, “Hail, Hydra,” fan reactions ranged from bafflement to outright offense. For a comic that supposedly explored serious political issues, it seemed pretty insensitive to have its beloved hero join up with a nazi-affiliated terrorist cult. It also looked like Hydra Cap was here to stay, because in the words of writer Nick Spencer, “This is not a clone, not an imposter, not mind control, not someone else acting through Steve.”

Rewinding to the recent past of Captain America comics, the second issue explains that Steve’s Hydra backstory was fabricated by the Cosmic Cube, wielded by his arch-nemesis the Red Skull. Recapping some of the events of Avengers Standoff: Assault on Pleasant Hill Alpha (also written by Nick Spencer), we’re reminded through a series of flashbacks that the Cosmic Cube was destroyed and reformed into the body of a young girl named Kobik. Remembering the Red Skull as her “friend,” Kobik secretly joined forces with Hydra while continuing to work for S.H.I.E.L.D.

When Kobik proves that she can change people’s memories and loyalties, the Red Skull knows exactly what he wants: for Steve Rogers to betray his closest ideals. So, the Red Skull engineers a situation where Kobik can turn Steve Rogers into what she sees as his “best” self. This leads to him regaining his youth and vitality (which we already knew), along with a slew of false memories about being a member of Hydra.

Following last month’s plot twist, Kobik’s involvement feels unavoidably awkward, not to mention a little rushed. Despite the widespread criticism of issue #1, very few people believed that Hydra Cap would last. It was safe to assume that, like many superhero plot twists before, it would eventually be retconned or reversed.

The problem was, Marvel heavily publicized Hydra Steve Rogers with a series of interviews from the comic’s creative team. They assured readers that the plot twist was 100 percent real, putting Marvel between a rock and a hard place: either they were telling the truth and Cap was now indelibly associated with nazi supervillains, or the whole thing was a headline-grabbing fakeout, conveniently boosting sales for the comic’s first issue.

Two issues in, the reaction to Captain America: Steve Rogers reflects a whole host of problems in superhero comics right now: changing audience demographics, the conflict between short-term publicity versus long-term audience retention, and a disconnect between fans and creators.

Comics fandom has a tendency to freak out at the drop of a hat, which is why last month’s controversy fed into a larger public conversation about fan entitlement. The Hydra Cap backlash is very different from people reacting to something like Wonder Woman’s latest costume redesign, however. Why? Because it involved turning an anti-fascist hero into a nazi sympathizer, without any visible understanding of the story’s impact in a real world context. Reversing the plot twist in the second issue doesn’t really detract from this. Arguably, it cheapens it.

In a wider sense, the reaction to Captain America: Steve Rogers also raises questions about when people should judge a comic. Some fans argued that you shouldn’t scrutinize an entire book based off its introductory chapter. Fair enough. However, Marvel’s publicity blitz basically invited fans to do just that, hoping for the best of both worlds: a huge audience for issue #1, followed by a continuing readership as the story unfolds.

Issue #1 did impressively well, selling almost four times as many copies as the latest Captain America: Sam Wilson. We’ll find out over the next few months whether those readers stick around.