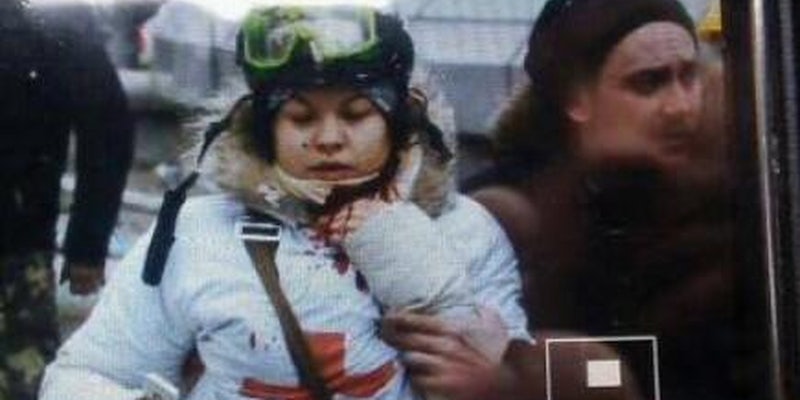 This Ukrainian medic just livetweeted her own near-death experience

This gripping story from the streets of Kiev has captured the world's attention.

In a truly disturbing sign of the times, a Ukrainian medic just livetweeted her own near-death experience.

Olesya Zhukovskaya, a 21-year-old medic assisting in the anti-government uprising in Kiev has reportedly survived a sniper attack that captured the world’s attention after she tweeted about it as it was happening.

The Guardian, citing protest group Euromaidan, says Zhukovskaya was shot in the neck during the riots. Her most recent tweet eight hours ago reads “I’m dying.” A photo of Zhukovskaya wearing a white coat with a red cross and clutching her bleeding neck was shared thousands of times by social media users who have been watching the violent Ukrainian insurrection in real time.

Many on Twitter rushed to prematurely declare the 21-year-old protester dead. But now Euromaidan is reporting that a successful surgery has saved her life.

While Zhukovskaya lay on the operating table, her story was shared around the world thanks to social media. Thousands relayed messages of support.

Twitter says that Olesya Zhukovskaya is alive and is undergoing surgery. Pray for her!

This gripping story comes amid a week of intense fighting in the Ukrainian capital, where protesters have risen up against President Viktor Yanukovich. Though demonstrators have besieged Kiev since late November and there have been violent clashes in the past, none of the previous fighting compare to what’s taken place this week between protesters and Ukrainian secret police.

As of Thursday, the Associated Press reports that 59 people have died this week, including 33 people who were killed in a battle that was supposed to be a truce. Protesters feared the proposed cease-fire was a ruse by government forces and began hurling firebombs. Government snipers began firing back and it’s believed that Zhukovskaya was injured during this melee.

Though the uprising in Kiev has been characterized as pro-European Union or anti-Russian, local journalists have said the demonstrations are a referendum on the entire tenure of Yanukovich. Though Yanukovich was democratically elected in 2010, his administration has established a long record of corruption. His administration is accused of censoring mainstream media outlets and harassing the middle class through government tax agencies. He’s also worked to consolidate government power under his command.

Though Ukrainian politics do not typically dominate American front pages, the recent protests have garnered a substantial amount of attention due to demonstrator’s heavy use of social media to promote awareness of their cause. In addition to thousands of Tweets and photos, a number of protesters, like blogger Alexander Aronets, have been streaming the events live online.

Aronets tells the Daily Dot that “streaming on the Internet is important because thousands of people can watch live what is happening in Maydan [Kiev’s central square].”

Aronets went on to say, “I think the regime of Yanukovich consists of thugs, murderers, embezzlers, and they understand that if the people win, they all be imprisoned.”