After Turkish Prime Minister Tayyip Erdoğan blocked access to Twitter Thursday, the Turkish people protested by quickly finding workarounds. In fact, Turkish users broke the record for the number of tweets sent out from their country (over 17,000 a minute, according to the BBC) using the hashtag #TwitterisblockedinTurkey.

Among those upset with the ban: Turkey’s own president.

“A total shutdown of social media platforms cannot be approved,” President  Abdullah Gül wrote from his personal Twitter account (in Turkish; the tweets were translated into English by English-language Turkish newspaper the Hurriyet Daily News.)

“As I have said many times in the past, at the point where communication technologies have reached today it is technically impossible to entirely block access to social media platforms used across the world such as Twitter. I hope this practice will not last long,” he wrote. 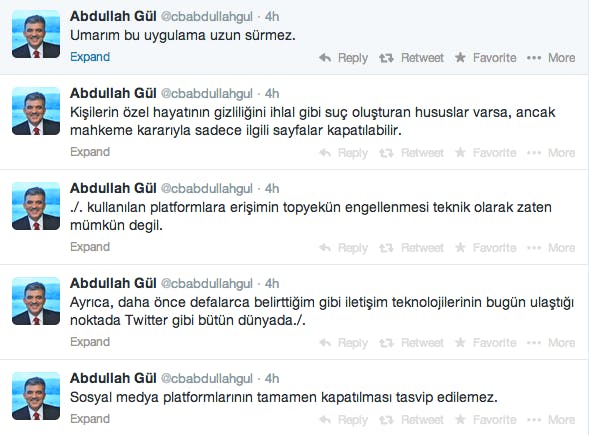 Gül is no opponent for Erdoğan: The two politicians co-founded the AKP together, and are considered allies. So this outspoken disapproval hints at a schism within their political circle.

Turkey’s lawyer’s association asked courts to overturn the ban, and Turkey’s main opposition party is also fighting it. And according to the Hurriyet Daily News, lawyer Gönenç Gürkaynak will represent Twitter in a meeting with Turkey’s Telecommunications Authority (TİB) in Ankara.

Daily Dot is still awaiting confirmation about that from Twitter, however.

Turkey’s social media users are revolting against the court-ordered outages, and now the country’s president calling for the end of the ban. Erdoğan’s decision to pick a fight with Twitter is already proving deeply unpopular.