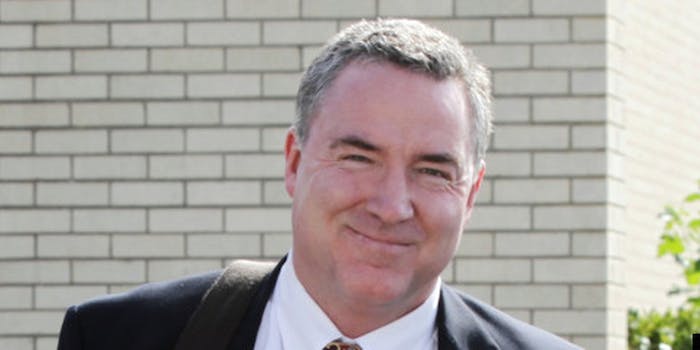 The Texas judge who made headlines three years ago when a video of him viciously beating his daughter surfaced online is finally off the bench.

Aransas County Court-At-Law Judge William Adams failed in his bid for re-election Tuesday—a defeat many credit to the alarming video.

Secretly tapped by his daughter Hillary Adams back in 2004, the recording shows the judge screaming at the then 16-year-old girl, knocking her down, and beating her continuously with a belt for nearly eight minutes. The beating was in response to the girl’s illegal file downloading.

Hillary Adams ultimately released the video seven years later in 2011, deciding that publicly exposing her father was the only way to make him accountable for his actions in a town where he enjoyed a cozy relationship with law enforcement.

“Whenever I tried to say I needed help and was being treated horrifically at home, people would scoff and tell me what a wonderful father I had,” Hillary Adams said during a Reddit AMA at the time the video was released online. “THERE WAS NO WAY TO SOLVE IT PRIVATELY, because Dad would squash any outreach. He controlled the community. Anyone remotely employed with the government who knew how he really operated was scared to death to come forward, because he could have them fired. He even threatened my little sister’s school counselor’s job if she said anything suggesting abuse during sessions.”

The video has been seen by nearly 8 million viewers and brought national media attention at the time of its release. The judge defended himself by saying the video made things look worse than they actually were and he said the video was released spitefully in response to his threats to cut-off financial support to his now-grown daughter.

At the time the video was release, William Adams was able to avoid any jail time or legal penalties, with local prosecutors determining that too much time had passed to bring charges. The judge was merely suspended for a year—with his full $150,000 annual salary—before being reinstated by the Texas State Supreme Court in 2012.

But on Reddit, users mobilized to remove William Adams from the bench. The /r/JudgeWilliamAdams subreddit was formed just to keep the story alive until the judge faced re-election this year.

On Tuesday, William Adams sought the Republican nomination for a fourth full term in office. He lost by a margin slimmer than one might assume. Challenger Richard Bianchi, the Aransas County attorney, bested him by just 7 percent of the vote. With no Democrats running for judge in Aransas, Bianchi will likely assume the role at the beginning of 2015.