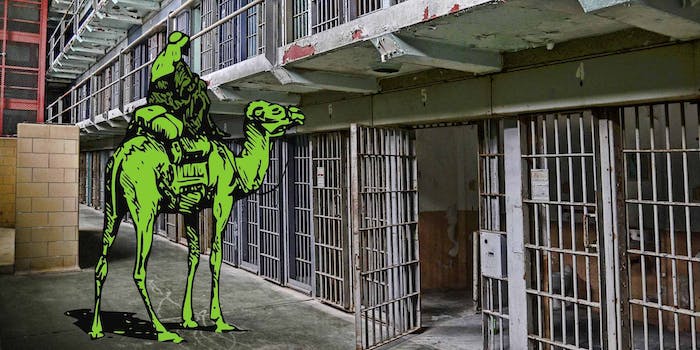 The first brick in the Silk Road crumbles under legal pressure.

“SuperTrips” was the name, or pseudonym, and slinging ecstasy was his game. But now, the man who prosecutors say was the most prolific drug dealer in the history of the infamous online blackmarket Silk Road has pleaded guilty to leading a major drug trafficking conspiracy.

Cornelis Jan Slomp, 22, of Woerden, the Netherlands, officially accepted guilt for his crimes at an arraignment hearing in a Chicago federal courtroom Thursday.

“Slomp was the world’s largest drug-trafficking vendor on Silk Road by volume of business and customer base,” the plea agreement reads, “conducting sales of illegal drugs in the millions of dollars and deriving his livelihood from drug-trafficking criminal activities.”

Investigators said “SuperTrips” conducted more than 10,000 transactions and earned about 385,000 bitcoins, selling 104 kilograms of MDMA, 566,000 ecstasy pills, four kilograms of cocaine, and significant quantities of LSD and marijuana through his Silk Road pseudonym “SuperTrips,” during an 18-month period beginning in March 2012.

Though he worked with partners in the U.S. and abroad, Slomp was the boss of the “SuperTrips” account, according to the plea agreement. Slomp even paid one of his employees $5,000 per week, the document says.

Department of Homeland Security customs investigators got onto Slomp after intercepting a package containing crystal MDMA in an empty DVD case at Chicago’s O’Hare International Airport, in April 2012. There was a fingerprint on the DVD case, and, because the U.S. and the Netherlands have in place a Mutual Assistance Legal Treaty, the investigators were able to trace the print to Slomp.

Slomp has been in custody for nearly 9 months. While carrying about $20,000 in cash, he was arrested on Aug. 27 at Miami International Airport, after arriving from Europe on a trip to meet his Silk Road partners, according to an announcement from the federal prosecutor’s office.

Under questioning from customs officials at the airport, Slomp admitted he was a Silk Road vendor. The arrest was kept under wraps until April 24, when Slomp’s attorney authorized the prosecution to disclose Slomp’s intention to plead guilty.

At the time of his arrest, Slomp had accumulated more than $3 million in illegal proceeds, according to the plea agreement. That total included money and bitcoins, which the government has since converted to cash.

Slomp faces a maximum of 40 years in prison and up to a $5 million fine, in addition to the $3 million in proceeds he’s expected to forfeit. The sentencing judge is expected to show some degree of leniency though, since Slomp agreed to plead guilty and potentially cooperate with federal prosecutors on other investigations.

In a phone conversation on April 28, Paul Petruzzi, Slomp’s defense attorney, told the Daily Dot he was hoping Slomp would be allowed to serve his prison sentence in the Netherlands. Petruzzi could not be reached for comment after Thursday’s arraignment hearing.

The FBI shuttered Silk Road, which it described as “the most sophisticated and extensive criminal marketplace on the Internet,” on Oct. 1 of last year. The site conducted millions of mostly-illicit transactions during its roughly two-and-a-half year run.

Slomp is the first major Silk Road player to officially accept guilt. Cases are pending for others who were allegedly involved with the site, most notably Ross Ulbricht, who has been charged with running the site under the alias “Dread Pirate Roberts.”

Even Steven Lloyd Sadler has a trial date set for June, and Sadler, in a series of extremely detailed phone conversations with the Daily Dot, admitted to being Silk Road heroin and cocaine dealer “Nod.”

Sadler broke his bond agreement in attempt to flee, but he was eventually tracked down by law enforcement.

“To date, he has not changed his plea. He may do so at any time,” Thomas M. Woods, assistant U.S. attorney for the Western District of Washington, told the Daily Dot in an email. “Unless he changes his plea, there will be a trial in this case.”

As for Slomp, he’ll learn the specifics of his fate when he’s sentenced, but there’s no hearing scheduled yet. He’s set to be back in court on Aug. 14 for a status hearing. The full plea agreement in his case is copied below.

Remixed photo by Bob Jagendorf/Flickr and Silk Road (CC BY 2.0)