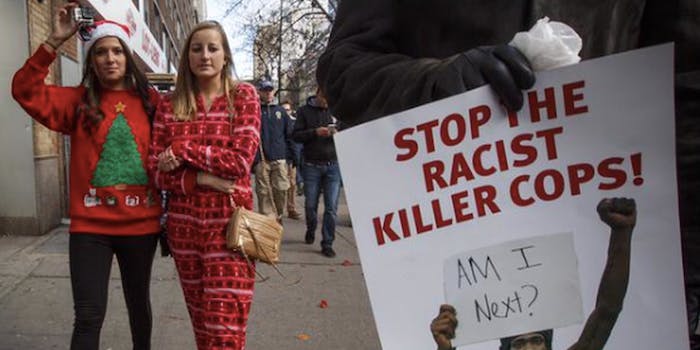 One march is for justice. The other is to get drunk while wearing a silly hat.

Two major events brought New Yorkers to the streets Saturday in droves, and they couldn’t be more different in nature.

First, SantaCon, an annual gathering of people dressed as Santa for no reason other than “it’s fun,” according to their web site, is celebrating its 20th anniversary. The event is known for public displays of drunkenness by its participants, and is at its essence a massive, costumed bar crawl.

At the same time, the Millions March, a protest in response to Ferguson and Eric Garner, and against racial injustice and police misconduct, took to the streets, starting in Washington Square Park. It’s one of the many protest marches taking place nationwide this weekend in response to deaths at the hands of police.

Best signs: "#santacon = #CrimingWhileWhite " and "Kids of Color: You are Loved." #BlackLivesMatter @MillionsMarch

#NYC today in a nutshell: People getting wasted for #SantaCon + the #MillionsMarch #protest #BlackLivesMatter

However, some found reason to celebrate the overlap: Fighting injustice while wearing festive holiday attire.