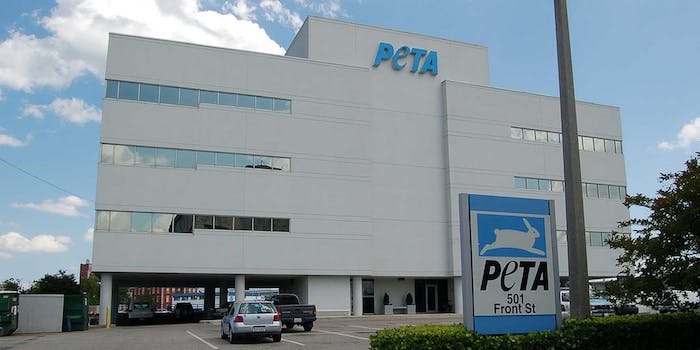 The world's most successful trolling organization is furious that anonymous strangers said unflattering things about it on the Internet.

People for the Ethical Treatment of Animals (PETA), the world’s most successful trolling organization, is furious that anonymous strangers said mean things about it on the Internet.

The animal rights group opened a lawsuit in New York state court last week seeking to out the identity of three anonymous Huffington Post commenters, who’d left unkind remarks about it following an April 4 exposé on the brutal conditions inside one of PETA’s supposedly humane animal shelters.

The suit demands Huffington Post hand over the names, email addresses, and phone numbers for users “Lucy Van Pelt,” “Eyema Nurde” and “ambersommerville.” PETA claims their comments were “false and defamatory.” But the worst any of them did, according to court documents obtained by the New York Post, was call the group “animal Kevorkians,” a reference to Dr. Jack Kevorkian, the famous right-to-die advocate who helped at least 130 terminally ill patients commit suicide.

Depending on how you feel about Dr. Kevorkian, that might actually be a pretty flattering comparison. Regardless, the comment barely stands as a footnote in the history of nasty things said about PETA online.

PETA needs the identity of the commenters before it can level separate suits against them. Curiously, it’s made no legal threats against the Huffington Post or the exposé’s author.

Here’s the full comment in question left by HuffPo user ambersommervile (what could her real name possibly be?) on April 8:

One: PETA is crazed and needs to be shut down. They’re animal Kevorkians driven by a bizarre combination of beliefs—a love of euthanasia, and a hatred of people who’ve domesticated animals. There was probably compassion for animals in their distant past, but that is long gone. Animals are a mere focal point for anger at people. I interviewed with PETA in 1994, and euthanasia was an important topic in that interview. Based on that, I suspect that they’ve been doing this wholesale slaughter of adoptable pets for over twenty years. …

Other comments have brought up how PETA will go into disaster areas to try to quickly euthanize lost pets before the owners can find them.

Two: I’ve learned that the mark of a PETA supporter is they live in their own echo chamber. They think this story is about No-Kill shelters (which are excellent, by the way). Nothing could be farther from the truth. This story is about PETA’s hypocrisy and their killing 90% of the animals that come into their care.

Correction: An earlier version of this story incorrectly stated that PETA had “dropped” the lawsuit. This was a typo. We regret the error.