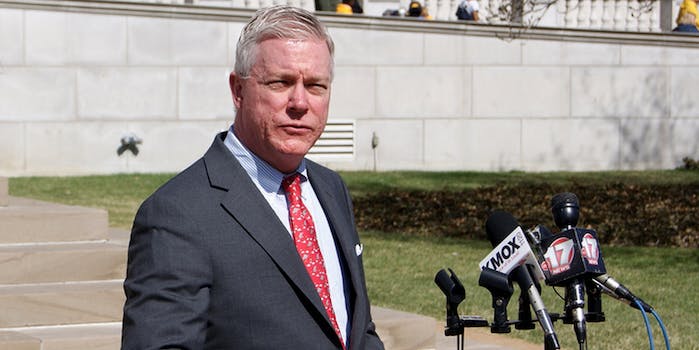 "The appalling facts in the public record shock the conscience," Peter Kinder said.

The Maryville, Mo., teen whose case against her alleged rapists went unprosecuted, and who instead was harassed, ostracised, and driven out of town, may have a new hope for justice.

After intense public outcry, Missouri Lieutenant Governor Peter Kinder is urging the Nodaway County and state prosecutors to convene a grand jury to investigate and possibly re-open the case of 14-year-old Daisy Coleman. The Lt. Gov.’s comments come in the wake of an expansive investigative report by the Kansas City Star that brought to light numerous instances of harassment in the case and raised questions about why charges had been dropped despite strong medical and corroborating evidence from witnesses.

As with the rape of a teen in Steubenville, Ohio, the alleged perpetrators of the Maryville sexual assault are beloved hometown heroes, former members of the town’s high school football team and members of longstanding local families. But unlike in Steubenville, where authorities were already working to prosecute at least some of the perpetrators, all charges in Coleman’s case were dropped. A Los Angeles Times investigation found that Nodaway County Sheriff Darren White and Coleman’s mother both disagreed substantially in their recollection of basic facts about the case:

“The prosecutor went after this with a fervor,” White told The Times. “It was only when the victims refused to cooperate and assist in this case that he ultimately had to drop the case.”

But that doesn’t quite match statements White gave the Star that Coleman’s mother “would come to the sheriff’s office on an almost daily basis,” nor statements that Nodaway Prosecutor, Robert Rice, made calling the acts “reprehensible” but not “criminal,” claiming rather that it was a case of “incorrigible teenagers” getting drunk and having sex. Coleman’s mother also told the Times that, far from refusing to cooperate, her daughter actually refused to claim her 5th Amendment right to silence.

Given that the incident left one “incorrigible teenager,” Coleman, crying, unable to walk, and shivering alone on her own porch in below-freezing temperatures, it’s no wonder that Lt. Gov. Kinder is skeptical.

“I am disappointed that the Attorney General would wash his hands of the matter through a brief statement by a spokesman,” Lt. Gov. Kinder stated, referring to the Missouri Attorney General’s office issuing a statement yesterday evening claiming that it had no legal power to reopen the case. “The appalling facts in the public record shock the conscience and cry out that responsible authorities must take another look.”

Kinder’s statement follows an uproar from hacker collective Anonymous, who have done everything from pummeling state and local offices related to the case with phone calls and emails to leaving outraged Yelp reviews for the restaurant owned by the parents of Jordan Zech, the teen who allegedly filmed Coleman being raped and then passed the video around her high school.

But for now, the Nodaway prosecutor’s office is remaining silent, and when the state Attorney General refuses to act, Yelp reviews can only do so much.

Coleman, meanwhile, has not commented publicly on the events in the case, but has maintained a public Facebook page throughout the ordeal.  “I know u don’t know me but I wanted to say I’m… on ur side 100%,” wrote a recent commenter.

The Internet may have sided with Coleman, but winning the hearts of the Internet and winning justice in the state of Missouri are apparently two very different things.