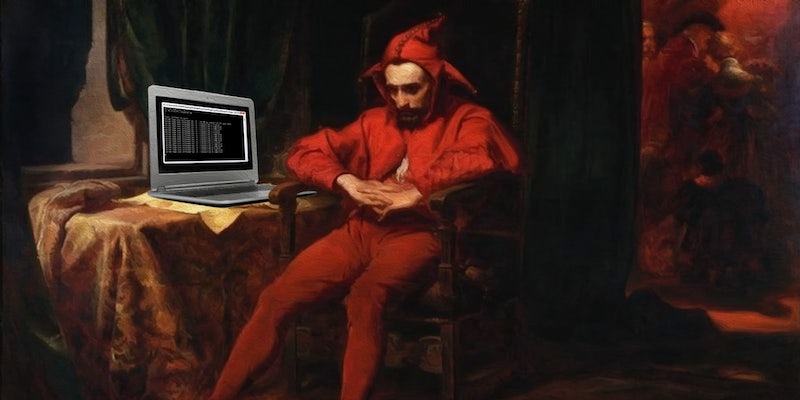 Notorious "patriot" hacker The Jester's website has apparently been seized—and he hasn't tweeted in days.

The Jester, a cyber vigilante famous for his pro-American hacktivism, appears to have just lost his blog and website to the U.S. Department of Homeland Security.

The notoriously patriotic hacker’s blog was located at jesterscourt.cc until early Thursday morning, when it was replaced with what appears to be a notice of seziure from Homeland Security’s Immigration and Customs Enforcement division—the main investigative arm of DHS—for what seem to be charges of copyright infringement. 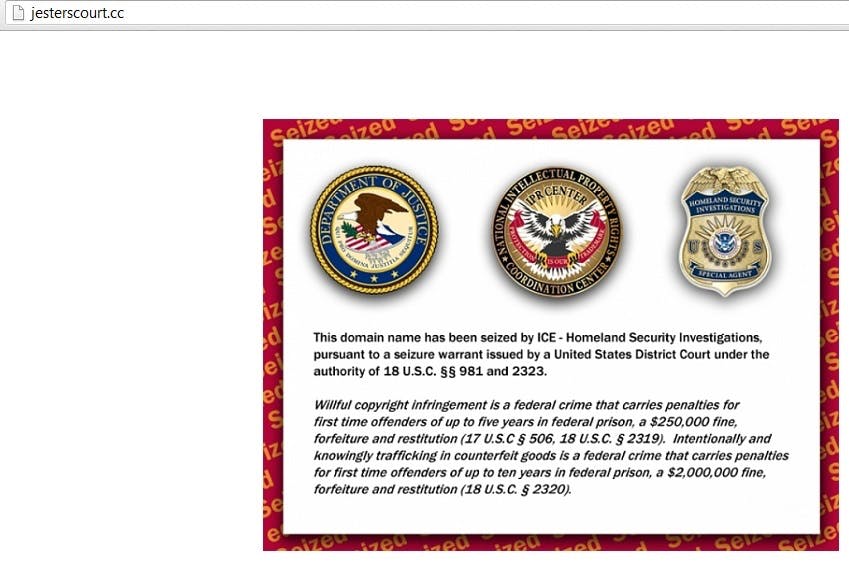 Many of Jester’s fans have called the notice fake, pointing out that the takedown notice is hosted on Jester’s own directory and that ICE hasn’t issued a press release or responded to media questions about the authenticity of the notice.

However, the Daily Dot visited several websites on the ICE’s official seizure list, and found that it’s standard practice for the agency to host takedown notices on a seized website’s own domain. The Daily Dot has contacted ICE repeatedly regarding jesterscourt.cc, but the agency has not provided a comment.

Interestingly, the ICE notice has become physically larger since it first appeared on Thursday morning. The GIF roughly doubled its size at some point yesterday at the command of whomever now controls the domain.

UPDATE: Actually, it may be The Jester laughing now. His website is back, and ICE denies they seized it.

Jester’s vigilantism was first aimed at jihadist recruiting websites in 2010. Since then, he’s publicly attacked WikiLeaks, Anonymous, 4Chan, LulzSec, the Ecuadorian Stock Exchange and more. After an attack, Jester typically leaves his signature on the defaced website and announces his latest victim to the world with an enthusiastic “TANGO DOWN” tweet from @th3j35t3r.

https://t.co/QKgsgGG8wR – TANGO DOWN – Web front for ‘Lashkar e-Taiba’ who were behind the 2008 terror attack in Mumbai. Naughty Naughty.

This is not the first time that Jester’s web presence has been in trouble. In May 2012, both Twitter and WordPress suspended his accounts. However, both were restored in less than a week and neither suspension seemed to involve the American government.

This domain seizure comes at a time when Jester had been heavily publicizing his weekend-long attendance at the Blackhat Briefings, a major computer security conference in Las Vegas that attracts many of hacking’s best and brightest and, this year, played host to National Security Agency director General Keith Alexander.

Jester tweeted pictures from the convention floor and even commented on General Alexander’s talk as it occurred.

Did someone in the audience just say ‘Bullshit’ to Gen Alexander? #BlackHat

Jester cultivates the image of a pro-American vigilante of the sort that may have done well in comic books a half century ago—he even uses a modified picture of Captain America as his Twitter portrait.  The choice is fitting: Both Jester and Cap are ex-U.S military men fighting moral crusades against people they perceive as villains. Jester claims to be an American veteran who served four tours in Afghanistan. In his IRC chat, he asks any fans thinking of donating money to him to support the Wounded Warrior Project instead.

For much of this past weekend, Jester playfully taunted his 56,000 Twitter followers with hints at his location and identity.

#Blackhat Keynote prep. If you’re the guy in beige & turn to ur 5 o’clock I took this pic 9 mins ago & since moved https://t.co/rZevPsIlpY

Trying to raise J. Site seized. Things are not looking good for the citizens of Gotham City @th3j35t3r

The questions persist. @th3j35t3r has not tweeted since the end of the Black Hat conference  Wednesday night, shortly before the ICE seizure notice appeared.