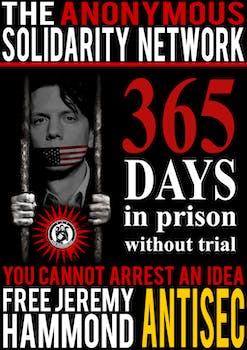 The accused Lulzsec member and WikiLeaks source has been held for 365 days, much of it in solitary confinement.

It’s the first anniversary of the day Jeremy Hammond was arrested for the last time. Since his March 5, 2012 arrest, he’s been in Federal custody, and currently resides in “The Hole”—solitary confinement at the Metropolitan Correctional Center in New York City.

Hammond has yet to stand trial. If convicted, he could face anywhere from 35 years to life in prison, and it’s still unclear whether the year he’s spent in custody without trial will be subtracted from his total sentence.

Long pre-trial custody is now the norm for high-profile leaks and hacks—WikiLeaks whistleblower Bradley Manning has been held for more than 1,000 days. Once the trial is over, there’s no restriction on talking to the press, but prior to that time no competent attorney will allow a defendant to give interviews, lest it prejudice the trial.

Hammond’s alleged crimes center around the infamous Stratfor hack of December, 2011, in which the operations of a private global intelligence contractor were exposed for all to see.

Hacker crew LulzSec took responsibility. Over five million emails were obtained in the hack, and—after an apparent attempt by LulzSec leader (turned FBI informant) Hector “Sabu” Monsegur to ransom them to WikiLeaks—someone in LulzSec leaked them to the whistleblower site for free, much to the FBI’s dismay.

Hammond is being charged with that leak.

A lifelong activist and anarchist, Hammond organized his first protest at 12, and basically never stopped since, despite frequent arrests and convictions. After the Stratfor arrest, he waited eight months, until November 20th, to find out if he’d be granted bail. To no one’s surprise, he was not successful, but to everyone’s surprise, the judge cited his use of everyday internet technology such as TOR, an IP-anonymizing software developed for the US military, as a factor in judging him a flight risk.

Within two weeks Anonymous struck back, claiming that Judge Loretta Preska, who is presiding over Hammond’s case, is biased because her husband was a client of Stratfor’s. Judge Preska has declined to recuse herself, and her husband denied any relationship with Stratfor. Anons have taken umbrage at the dismissive tone of her remarks to the defense, and have begun two parody accounts which tweet “So what?” to anyone who asks a question.

Judge Preska is also the judge who granted another six-month sentencing delay for Sabu, who is reportedly continuing to cooperate with the FBI. Hammond’s next appearance before her is scheduled for April 20.

In the meanwhile, the Stratfor emails are available on the WikiLeaks site, and Hammond has entered into legend, being called everything from “The Other Bradley Manning” to “The Electronic Robin Hood.” He’s been adopted by OpPenpal, an Anonymous initiative to send letters to Anons in prison, and there are several Facebook groups dedicated to supporting him and other arrested Anons.

CORRECTION: A previous version of this article stated that Judge Preska would announce her decision on recusal April 20. The judge has already decided she will not recuse herself, in an announcement dated Feb. 21.