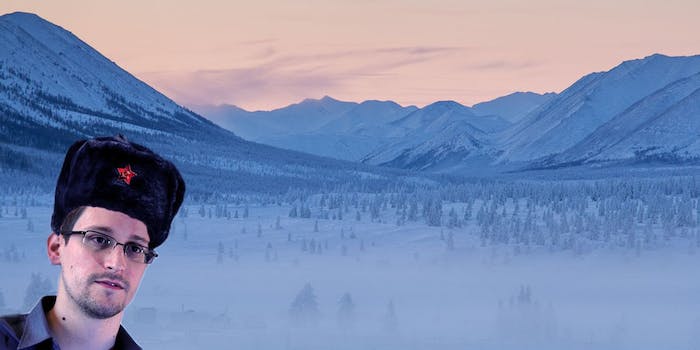 Russia will not extradite Edward Snowden—if he’s there

Foreign Minister Sergey Lavrov announced Tuesday that he would not honor the U.S.'s urgent request for Russia to turn Snowden over to the U.S. or halt his travels.

Russia has denied the U.S.’s request to extradite Edward Snowden and could be holding him for interrogation—if he’s still there.

Foreign Minister Sergey Lavrov announced Tuesday that he would not honor the U.S.’s urgent request for Russia to turn Snowden over to the U.S. or halt his travels. The two countries do not share an extradition treaty.

Update: According to RT, Russian President Vladimir Putin has claimed that Snowden is currently in the transit area of the “Sheremetyevo” airport and will not be detained.

Snowden spent three months as contractor for the National Security Agency (NSA) in a position that gave him access to evidence of intelligence programs. He instantly became one of the biggest whistleblowers in history by exposing the Internet surveillance program PRISM, but he’s believed to be carrying a briefcase outlining additional programs.

Lavrov seemed outright angry with U.S. requests. “We consider the attempts to accuse Russia of violation of U.S. laws and even some sort of conspiracy, which on top of all that are accompanied by threats, as absolutely ungrounded and unacceptable,” Lavrov said, according to the Associated Press.

Snowden is believed to be headed for Ecuador, which also has no extradition treaty with the U.S. and is generally considered a safe haven for whistleblowers. He was believed to be on a plane to Cuba Monday morning, but journalists who bought a ticket to join him found his seat empty.

On Monday, Patrick Ventrell, press director for the U.S. Department of State, said he believes that Snowden is still in Russia and that he’s optimistic the countries’ diplomatic ties would translate into the country helping the U.S. capture him:

“[W]e now know that he’s in – understand that he’s in Russian territory. And so, given our intensified cooperation working with Russia on law enforcement matters, including returning numerous high-level criminals back to Russia at the request of the Russian Government, we hope that the Russian Government will look at all available options to return Mr. Snowden back to the U.S. to face justice for the crimes with which he’s charged.”

But Lavrov refused to even confirm that Snowden had been to Russia and backed President Vladimir Putin’s office’s earlier claims that the country had no record of his whereabouts, except for what they read in the media.

“We have no relation to Mr. Snowden, his relations with American justice or his travels around the world,” Lavrov said, adding that “we have learned about it from the media.”

Russia-based Interfax News, which has become the go-to site for unnamed sources said to have information on Snowden’s whereabouts, reported that an anonymous source said Russian authorities may hold Snowden to “clarify the circumstances of his arrival.”

The AP noted that several televised sources in Russia have lambasted the idea that the country’s authorities aren’t aware of a fugitive travelling openly in their country.

WikiLeaks, which has claimed to be helping Snowden, announced through its founder Julian Assange Monday that Snowden was on a safe path, but he wouldn’t clarify.

Assange: we are aware of where Snowden is, he is safe and “his spirits are high”. We cannot reveal what country he is in at this time.