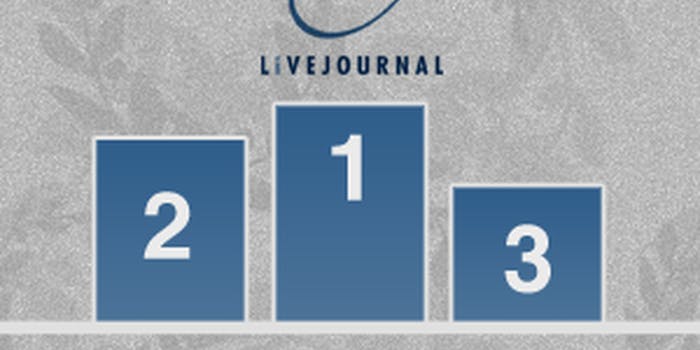 The 10 most important people on LiveJournal in 2011

The Daily Dot is the hometown newspaper for the Web’s varied communities. Today, we take a look at the top members of LiveJournal, the granddaddy of all social networks.

LiveJournal has seen a lot of users in its 13-year history—3.5 million, to be exact. Among them was Facebook creator Mark Zuckerberg. But as new social networks popped up, the once-vital blogging community dwindled. Neither LiveJournal’s creator, Brad Fitzpatrick, nor its mascot, Frank the Goat, have updated their journals publicly in more than a year.

Those who remain, though, are fierce in their loyalty to the site and passionate in their self-expression.

Today, the site centers around community journals. From Oh No They Didn’t to Bullying Begone, these group blogs are active hubs of discussion on a myriad of topics. In many cases, these communities have so drastically surpassed individual journals that they’ve become LiveJournal Inc.’s main focus and the subject of an upcoming site revamp.

In fact, we asked LiveJournal headquarters for help with the list, and they declined to provide us with data or recommendations. “In the US, the emphasis is on community, not individuals,” said LiveJournal spokesperson Tom Byron in an email to the Daily Dot. (In Russia, by contrast, LiveJournal is still one of the biggest social networks; Russian Internet company SUP bought LiveJournal in 2007.)

However, what makes a community? Individuals, of course. And in the case of LiveJournal’s top communities, the most influential individuals are its moderators. In order to keep things civil and topical, a moderator or team of moderators become the group’s most active users, tastemakers, and topic drivers.

So eight of our ten top LiveJournal users are mods. Because on this platform, it’s not who you are that makes you important; it’s what you contribute.

This celebrity-gossip reporter has become something of a celebrity himself. After years of moderating Oh No They Didn’t, LiveJournal’s largest community with 50,000 users, for free, the company offered him a full-time job. Now Brenden Delzer gets paid to do what he loves.

Some people are Internet drama queens. Jameth is more of a drama emperor, who regularly thanks his LiveJournal followers for their fealty. A former moderator for Encyclopedia Dramatica, Jameth is credited with coining the word “lulz,” a term for the mild amusement one derives from disturbing others. For ten years, his journal has been a record of his lulzy exploits.

In the real world, she’s a working mother of two. On LiveJournal, amenquohi is one of an elite few: the winner of LJ Idol Season 7, an ongoing blogging contest. A competitor since Season 4 in 2007, Amenquohi wrote in her winning post that she used her previous LJ Idol prompts in order to get a job writing for a magazine. We hope to see more from her soon.

In the past ten years, Kyle Cassidy has certainly made his mark. The community he founded and moderates, LJ Photographers, has accumulated 10,000 members. His rising influence as a photographer on the platform helped him meet Neil Gaiman and publish a photography book. Most recently, he’s given back to the platform as its final elected official on the LiveJournal Advisory Board, where he serves as a community liaison.

In a perfect demonstration of the site’s own evolution away from personal blogging and towards group discussion, lepapillonvert shut down her personal LiveJournal this Christmas. But she continues to be a pillar of Saucy Dwellings, the platform’s bustling interior-design community. This moderator not only leads the group’s “Open Sauce” topics, but is a talented DIY designer herself. Her kitchen and studio redesigns are shelter-magazine-worthy.

LJ Russia is culturally different from LiveJournal in the West, but what affects one affects the other. That’s why Alexei Navalny, a LiveJournal.ru user, has made our list. One of Russia’s many celebrity bloggers, this lawyer and anti-corruption activist is a rising star. Once simply LiveJournal-famous, he recently became the subject of a Washington Post profile.

Angry and stupid customers are one of the realities of service jobs that almost everyone can relate to. It’s no wonder that Customers Suck, the community silverdragon729 created and moderates, is so popular. Even though silverdragon729 stays behind the scenes, we have him or her to thank for keeping a community about furious ranting from dissolving into anarchy.

Like many of the others on this list, loveshannon hasn’t updated her personal journal in years. But that doesn’t mean she’s not a LiveJournal force to be reckoned with. Loveshannon runs LiveJournal Secret, the platform’s juiciest confessional. Every week, LiveJournal users send her hundreds of secrets in text and image-macro form to dish on the blog.

We don’t know much about wonderpup, aka Amanda, but we can guess she’s a great multitasker. She’s the owner and lead moderator of one of LiveJournal’s largest communities–– ONTD Political–– all while attending law school. A social liberal and fiscal conservative, she keeps the site from skewing too far to one side of the spectrum or the other.

When Lynnsey created a community for bullying victims, she didn’t realize her safe space would become one of the platform’s most innovative experiments this year. Her community, Bullying Begone, became a joint initiative with LiveJournal HQ, which promoted the site and offered prizes like iPads to people who participated. Since the partnership was a success, it paved the way for other regular community moderators to get their groups spotlighted, too.