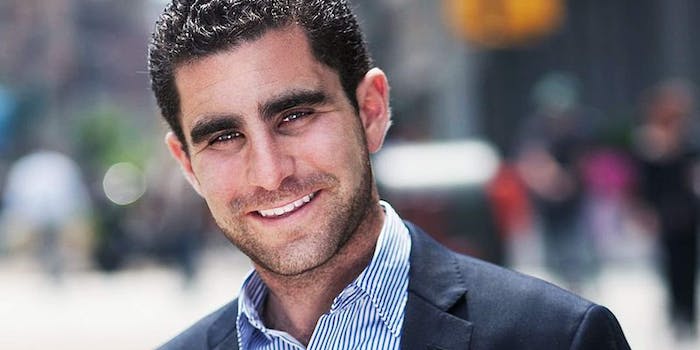 And the trial begins September 22.

Charlie Shrem, recently one of the most promising and prominent Bitcoin entrepreneurs on the planet, pleaded not guilty on Tuesday to allegations that could land him in prison for longer than he’s already been alive.

At age 24, the co-founder and CEO of the defunct Bitcoin exchange BitInstant faces up to 30 years in prison for allegedly conspiring to funnel more than $1 million in Bitcoin into Silk Road, the notorious online black market for drugs and other illicit goods and services.

Prosecutors say Shrem used his position at BitInstant in a money laundering conspiracy that also involved Robert Faiella, a 52-year-old man from Florida, who also pleaded not guilty to charges. Authorities say Faiella used the Silk Road username “BTCKing” to sell Bitcoin to others who intended to use it to purchase contraband on the site.

Both currently out on bail, Shrem and Faiella appeared in a Manhattan federal courtroom on Tuesday to enter their pleas. In addition to the money laundering conspiracy charges, the two men each face one count of operating an unlicensed money transmitting business, and Shrem faces one count of willful failure to file a suspicious activity report.

At the arraignment hearing, Shrem’s defense attorney, Marc Agnifilo, told the judge he anticipated receiving a “tremendous amount” of electronic evidence—including emails, private messages on Silk Road, and bank records—from the government, and he requested more than a month to sift through the material.

In addition to his business ventures, Shrem also served as vice chair of the Bitcoin Foundation. He resigned from that position shortly after his arrest.

Aside from his official positions, Shrem has also been a sort of favored son in the Bitcoin community, as well as one of the most vocal evangelists for the cryptocurrency. He has developed a reputation as a high-energy individual with a colorful personality. For instnace, Shrem has been quoted as saying he wouldn’t hire an employee before either drinking or smoking pot with the person.

Officials arrested Shrem at John F. Kennedy International Airport in New York on Jan. 27, and Faiella was nabbed at his home in Cape Coral, Fla., the next day.

Faiella’s defense attorney, David Braun, told the Daily Dot he intends to attempt to have the trial relocated to Florida, at least for Faiella, though he was unsure of whether or not the judge would accept his motion since the digital nature of the alleged crimes leaves room for interpretation when it comes to jurisdiction.

Below is the indictment against Shrem and Faiella.