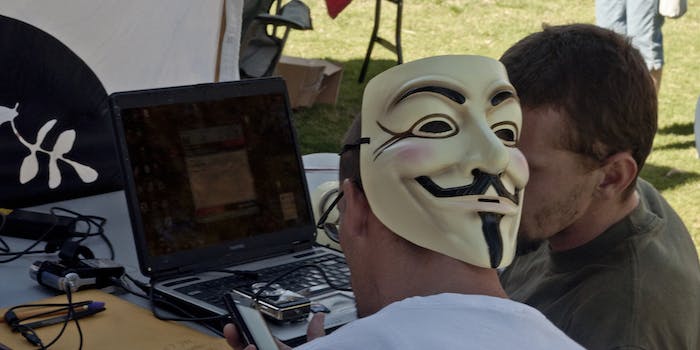 When Anonymous heard that teens Daisy Coleman and Paige Parkhurst had tried and failed to bring their alleged rapists to trial, it took action immediately. As with the Steubenville and Rehtaeh Parsons cases, members of the hacker group mobilized and launched #OpMaryville, spreading a video on social media to warn the Missouri town that Anonymous would take action unless authorities reopened Coleman’s case.

And now the case has been reopened.

There’s a virtual template for these operations, constantly refined to make the next op more effective and decrease the amount of hacktivist arrests and raids. YourAnonCentral, the principal Twitter account involved in publicizing #OpMaryville, told us that the campaign is very narrowly focused this time. They are not involved with any Facebook pages, for instance, nor are they running the Twitter accounts @OpMaryville or @Justice4Daisy. “One of the Facebook accounts posted a fake dox yesterday and told people to go to the house,” he said. “We suspect one of the accounts was created by someone trying to derail the operation.”

It’s a small, international team, whose members requested we keep even their Anonymous pseudonyms off the record—all but crypt0nymous, a well-known Anonymous video producer. Crypt0nymous was tasked with creating the message video for #OpMaryville, the call to action featured on websites around the world (including ours). But he’s had difficulty with YouTube. After the #OpMaryville video clocked 130,000 views, YouTube took it down, claiming it violated the site’s terms of service. Others had already uploaded copies of the clip, however.

Since the video went up on his channel, he saw no point in obfuscating his Anon identity in this interview.

We’ll call the interview participants A, B, C, and Redhacker. The latter is a team member of a Turkish political hacker crew that’s also working to support #OpMaryville. We spoke to him in a separate chat.

When did you hear about Daisy? What brought the case to your attention?

A: Unfortunately, we didn’t hear about the case until Dugan Arnett published his article in the Kansas City Star. We’ve had to do this kind of work before. I wish we didn’t have so many opportunities to utilize our anti-rape campaign skills. We quickly issued a press release, planned a Twitterstorm, and began working on a live protest. There was a protest already planned, so we decided to endorse it instead. I took what I learned from the Rehtaeh Parsons op and applied it here. The thing is, there’s no need for us to break laws here and provide authorities with ammunition against us. 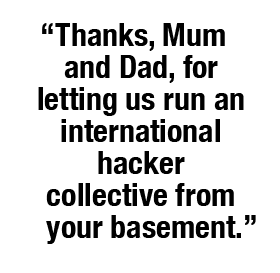 B: I saw a tweet with a link to the original article saying “This is what happens when anonymous doesn’t get involved in a rape case.”

A: Yeah, it’s a shame that we didn’t find out sooner. I’m just glad in this case that Daisy’s attempts at suicide were unsuccessful. So many other girls give up hope and check out. We’re lucky, in that sense. And I say “we’re lucky” because she’s such a brave and amazing young girl, both of them are.

I think she’s inspirational. Both of them. I’ve spoken with her mother. There’s a screenshot on YourAnonCentral.

Let’s talk about the video.

A: It peaked at over 100,000 hits and it was embedded in countless news articles. They [YouTube] labeled it a “scam.” I don’t want to speculate whether or not YouTube is intentionally censoring us or anything like that, but obviously there is something wrong with their system.

Will you be putting the video back up?

How long did the op take to come together as an action?

B: Like five minutes after reading the article. I  hit up Crypt0nymous, we started writing [press releases] and Twitterstorms.

A: Two. We outsourced the video to Crypt0nymous because he owed us. I guess, there were like five [team members] maybe?

C: Yeah literally five minutes, as soon as well all even mentioned the story to each other we were like “aw, shit, op time.”

A: We’re sick of this shit. We expect we’ll be fighting battles against censorship and copyright bullshit for rest of our lives, but when is law enforcement going to stop covering up for child rapists? It’s the 21st century. The justice department had no problem going after Aaron Swartz for 35 years or threatening Barrett Brown with 100 years in prison, but we’re still letting child rape slide? C’mon.

There are a lot of non-Anons working on this. You can see them all over the hashtag, and I think they’re taking inspiration from the acts of Anonymous in the past. Most of the people I see tweeting about it are not Anons and would not have known what an Op was a year ago.

B: I’m a professional.

Redhacker: The project is just in its first [stage] of grouping. The project itself is for now focused on rape cases similar to those in Maryville or Steubenville, where justice fails. And until justice prevails, hack and protest will replace it!

Yes, there is hacking in Maryville, but not technically. Like we said before, we don’t care about mainstream media attention, we care about people. We want justice! And if people try to ignore such cases in order to protect the image of the city, they are going to get hacked and faced with consequences.

So, do you think people will wear Guy Fawkes masks at the demonstration [10am Saturday, October 22, at the Nodaway County Courthouse]?

B: We aren’t calling for that. People can do whatever they want. Who knows how it will play out? 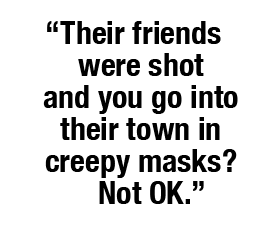 A: Masks aren’t always appropriate, particularly in some cases that involve traumatic rapes. But, we’re deciding whether or not to specifically ask people not to wear them.

B: People will be bringing daisies, perhaps we should find out Paige’s favorite flower as well. She wasn’t out in the open when it was planned.

We also suggested those who cannot attend could perhaps send some. After the Sandy Hook tragedy, a bunch of anons converged (because of Westboro Baptist Church) on the town in Fawkes masks, a town where a guy in a mask had just shot a classroom full of children. So, not always appropriate.

A: The Sandy Hook shooting, for example, that was not an appropriate place to wear a mask.

B: A town where a whole class full of children were killed by a guy in a mask. People were calling the police because their kids were scared shitless. Their friends were shot and you go into their town in creepy masks? Not really OK.

A: Yes, and some Anons attended to help stop the Westboro Baptist Church from picketing the funeral of the teacher slain in the shooting. Obviously, wearing a mask in a town where children were just killed by someone in a mask is inherently fucked-up. So, yeah, people should be conscious of when it’s okay and when it’s not. I don’t see an issue with people wearing a mask in Maryville. Although I’d probably stay away from Sheriff White.

B: I think people should [wear] whatever they want: mask, no mask, a lampshade on your head, whatever; just bring daisies.

A: I hear the lampshade look is going to be really hot in 2014. It’s a brilliant idea. Thank you for illuminating me.

What do you see as Anonymous’s involvement with this in the future? Given the suspects are known, the prosecutor is known, etc.

A: We’ll continue to keep an eye on the events that are unfolding. In this instance, we’re a publicity machine. The officials in Missouri may be waiting for this to blow over, but it isn’t going to. Like Sheriff White said, we’re all unemployed, right? We have plenty of free time on our hands. Like I said, we got the public’s attention. A lot of this is in their hands now. We just need to keep them motivated.

A: Other than the protest next Tuesday (Oct. 22), nothing specific. We’re encouraged a bit to hear that a special prosecutor may be assigned to investigate this case… but we can’t be bought off with promises. We need to see some action. And the officials in Missouri need to stop spending time in front of the microphone defending themselves and spend more time defending the girls. [the investigation has now been relaunched]

What do you need from supporters, followers, the public? What do you want to see in terms of results from them? Best-case scenario. The question of what you want from the justice system is entirely separate.

B: We are hoping not to have to bust out more action, to be honest.

A: Maryville can help rehabilitate its image next Tuesday by coming out to show their support for these girls. This is a public event, not a rowdy activist march. The officials there can do right by their constituents and seek justice for Daisy and Paige. There’s an opening right now for a hero in Maryville. It’s not Anonymous. It’s the person with actual authority that steps forward and admits they fucked up and proves they’re willing to do everything in their power to fix it. For God’s sake, they’re kids.

We issued a press release earlier, following statements to the press by prosecutor Bob Rice.

A: Some of the press release references Robert Rice’s press conference earlier today, which is also online now. The comments to Attorney General reference his prior statements in which he claimed he had no power to intervene in Daisy Coleman’s case.

A: We’ve given them an opening. They can reopen the case, actually perform an investigation, then get on television and tell everyone they did it because it was the right thing to do, not because the Internet demanded it be done. Take the credit, Anonymous doesn’t care. I would like to see an investigation as to why charges were dropped before the rape kits came back, personally.

The goal is to get shit done, not get pats on our backs. That’s why we don’t need someone like KY lingering around.

B: I intend to stay on [Missouri Attorney General Chris Koster] Koster’s ass like a hemorrhoid.

C: Could [you] write this? “Thanks, Mum and Dad, for letting us run an international hacker collective from your basement.”