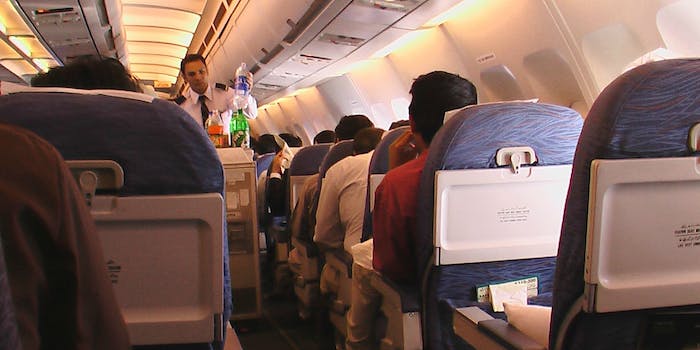 Children on the plane covered their ears.

A YouTube video has surfaced that makes your nine-hour flight beside screaming toddlers look like a walk in the park: It shows a woman being forcibly escorted off a plane while screaming expletives.

On US Airways Flight 738 to Lisbon on Sunday 3 August, a woman causing a disturbance before take-off was cuffed by officers after she refused to calm down—and she went on to unleash a torrent of foul-mouthed abuse while being frog-marched away.

“You’re fucking harassing me, you’re a fucking bigot,” the woman shouts as her arms are forced behind her back, while children on the plane cover their ears.

Redditor mikeirvingmedia posted the video to r/videos, where he explained the backstory to the video. “She was yelling on the plane, swearing a bunch. People didn’t want her on, police tried to escort her, she ended up yelling at them and just went cray,” he said, posting the message from the plane. “Great way to start a vacation! Happened 30 minutes ago… Taking off soon now.”

“She came on the plane yelling and swearing about how we are going to Portugal and not Brazil. She continued being loud and obnoxious and I’m assuming that some of the families with younger children told the flight attendants, who then called the police,” he added.

It’s unclear if further action was taken against the unruly passenger once she was removed from the plane.