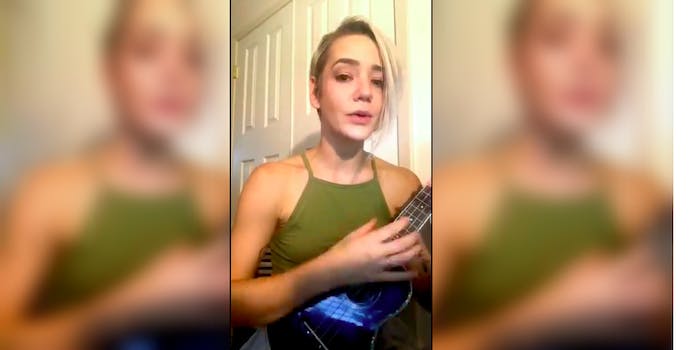 “It’s really tough when your reputation’s on the line/ And any woman you’ve assaulted could turn up any time,” @mercedeslynz sings.

Men like President Donald Trump and his son, Donald Trump, Jr., seem to think it’s a pretty scary time to be a man after Brett Kavanaugh’s contentious Supreme Court nomination. As men are being forced to take responsibility and face consequences for sexual misconduct in the #MeToo era, the president and his son are voicing their concern about a changing world.

Luckily, Twitter user @mercedeslynz understands. The dancer and choreographer (and, it turns out, ukulele player) wrote a ditty called “A Scary Time” to express her sympathy.

It's a really scary time for dudes right now. So I wrote a song about it. Go #vote friends! #TheResistance #1Thing @ACLU @WC4SJ #letsmakesomenoise pic.twitter.com/hz7E3xMRqR

“It sure is a scary time for dudes / Can’t text a girl repeatedly asking for nudes / Can’t make a girl have sex when she’s not in the mood / And what gives her the right to give you attitude,” she sings during one of the verses.

‘Yeah, it sure is a scary time for men / Girls act like you’re to blame and they’re the victim / Her dress was short and she was drunk / She’s not so innocent / Thank God your dad’s the judge and you won’t be convicted,” she continues, highlighting some of the ways patriarchal privilege and power have kept many abusers from being held accountable for their actions.

@mercedeslynz also addresses the small indignities that women endure in their daily lives, as well as the constant hypervigilance they must assume to keep from being assaulted.

Wearing headphones while running, wearing miniskirts, having a first-floor apartment, drinking alcohol, going alone to a bar without being bothered—these are all things that many women feel can’t do without worrying they’ll be harassed or worse.

The video has been getting a lot of love online; it’s racked up 5.4 million views on Twitter as of this writing, and over 170,000 views on YouTube. Mark Ruffalo even tweeted about it:

Listen to women like @MercedesLynz to give you an idea of the world as they experience it. pic.twitter.com/tNc6ilvRlO

“It’s really tough when your reputation’s on the line / And any woman you’ve assaulted could turn up any time,” @mercedeslynz sings, seemingly in reference to Kavanaugh’s confirmation process.

For being a cute viral video, “A Scary Time” effectively calls out the entitlement of men like Trump and Kavanaugh, who think their reputations and professional accomplishments are more important than women’s lived experiences.