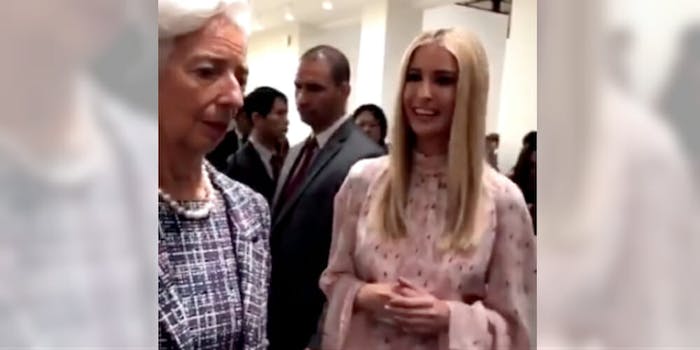 People are Photoshopping Ivanka Trump into places she doesn’t belong

It's a riff on her presence at the G20 Summit.

Ivanka Trump can be seen in a viral video awkwardly trying to insert herself into a conversation amongst world leaders at the G20 Summit. People are now Photoshopping her into places she doesn’t belong to make fun of the moment–along with the hashtag #UnwantedIvanka.

The First Daughter and White House advisor received criticism for her involvement in the G20 Summit, despite her lack of status as an elected official or member of the president’s cabinet.

It may be shocking to some, but being someone’s daughter actually isn’t a career qualification.

It hurts our diplomatic standing when the President phones it in & the world moves on.

The US needs our President working the G20. Bringing a qualified diplomat couldn’t hurt either. https://t.co/KCZMXJ8FD9

Critics suggested the video showed Trump interjecting into a conversation she was not welcome in or qualified for, thus the Twitter sensation of #UnwelcomeIvanka was born.

“I also had a dream, but you can go first. #UnwantedIvanka,” one Twitter user wrote.

Trump can now be seen everywhere she doesn’t belong, from playing football next to a kneeling Colin Kaepernick to standing with serial killer Ted Bundy.

I also had a dream, but you can go first.
#UnwantedIvanka pic.twitter.com/nAyuMaX2P3

When all the cool kids start talking about the #GameOfThrones finale and you jump in the conversation even though you’ve never watched the show.#unwantedivanka pic.twitter.com/7v3aIk6lhp