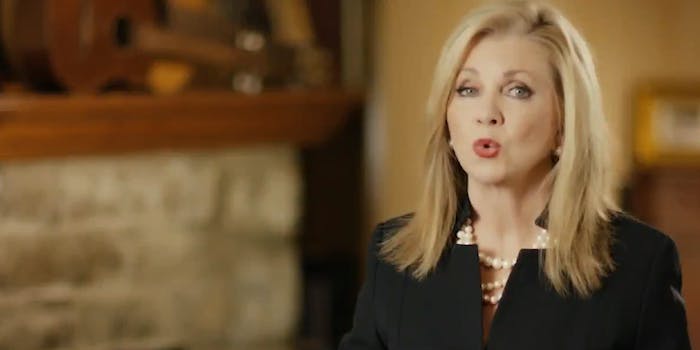 Twitter blocked a campaign ad for a Republican Senate candidate running to take Sen. Bob Corker’s seat in Tennessee that featured a false assertion that she was part of an effort that “stopped the sale of baby body parts.”

Rep. Marsha Blackburn worked on the Republican-run panel in the House of Representatives that investigated Planned Parenthood after secretly recorded videos claimed to show the women’s health organization providing fetal tissue to researchers.

Twitter’s decision to block the ad, which the company made because it contained “an inflammatory statement,” will likely spark backlash among conservatives who already view Silicon Valley firms as hostile to their beliefs.

The videos Blackburn appears to reference were deemed to be manipulated. Planned Parenthood said the videos were deceptively edited.

Providing legal tissue to researchers is legal if no profit is made, and congressional investigations found no evidence of the organization making money off of the practice. Blackburn led a House panel that investigated the sale of fetal tissue but found it “makes a vanishingly small contribution to clinical and research efforts, if it contributes at all.” The panel recommended the federal government not fund research involving fetal tissue.

Twitter said the video was “deemed an inflammatory statement that is likely to evoke a strong negative reaction,” according to the Associated Press. The social media platform said Blackburn could run the rest of her ad if the portion of her claiming she stopped the sale of “baby body parts” were taken out of it.

The blocking by Twitter does not allow Blackburn to promote the video, but she can still share it on the social network as a normal tweet or on other platforms. Her campaign posted the video earlier on Monday.

.@Twitter shut down our video ad, claiming it's "inflammatory" & "negative." Join me in standing up to Silicon Valley → RETWEET our message! pic.twitter.com/K3w4AMgW6i

Blackburn responded to Twitter’s decision by calling on her supporters to join her in “standing up to Silicon Valley.”

In the ad, Blackburn shoots a gun and says she’s “100 percent pro-life,” carries a gun in her purse, and stands during the national anthem.