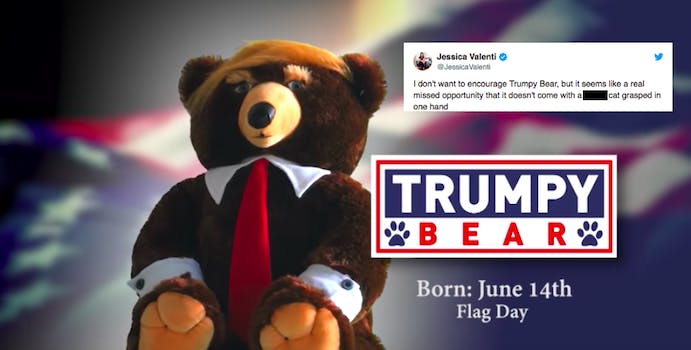 Trumpy Bear is here, and Twitter can’t get enough

Yes, Trumpy Bear is real. No, we don't understand it.

Twitter went nuts on Monday when a video advertisement for a product called Trumpy Bear went live on Fox News.

“A storm is coming,” an ominous voiceover starts, over a background of dark clouds and lightning. An image of a grizzly bear roars forth.

“I am the Storm,” the voiceover continues, with text to match.

For those of you not in the know, Trumpy Bear is a real plush stuffed toy that’s for sale through Exceptional Products, Inc., which manufactures products for sale on television.

The Trumpy Bear was “born” June 14, Flag Day (which is also Trump’s birthday), but it’s just now getting the attention it deserves. After the ad aired, Twitter couldn’t get enough of it.

I can't believe this commercial that just ran on Fox News is for real pic.twitter.com/gGInt8BKhp

I bought the deluxe version that comes with payoff money to keep Barbie quiet. pic.twitter.com/1zV1ClqhCy

I mean COME ON https://t.co/OJ3UxsSuhI

“When I ride with Trumpy Bear, it makes my golf game great again. Thanks, Trumpy Bear!”

”When I go on patrol, I’m rolling with Trumpy Bear.”

The stuffed animal comes with yellow hair and eyebrows, just like the president. It also has a compartment in the back that contains an American flag-themed blanket, which Trump (most likely) does not have.

The toy seems to be a take on the Teddy bear, named after President Theodore Roosevelt for his refusal to kill a black bear during a hunting trip.

The Daily Dot reached out to Exceptional Products, Inc., for comment on the advertisement, but did not receive a response by press time.

And much like the way Trump can alight the internet again and again, this is not the first time Trumpy Bear went viral.

It was first noticed by Twitter back in July.