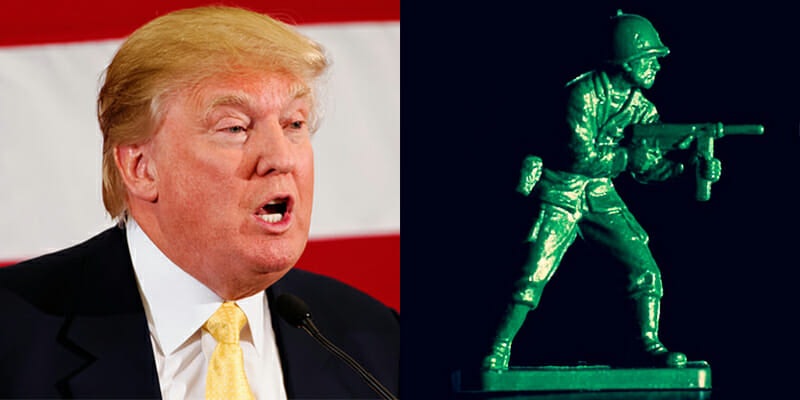 Fox anchor says Trump should play with toys, not hold a military parade

He's not the only one who thinks Trump's parade idea is dumb.

Not many people are keen on the idea of the military parade that President Donald Trump has reportedly requested. But one Fox News anchor has a suggestion for what Trump can do instead of spending the millions it would cost to ship tanks and shiny hardware to Washington, D.C.

“He could go see the tanks at a military base if he wanted to,” Smith said. “Or they could give him replicas. Little mini replicas. I mean, he wants to see what he has. I had some of those when I was a kid.”

Smith added, “You can get the little plastic ones and lay them out on the table and say, ‘Here you go.’”

Griffin made a joking suggestion of her own.

“We can play strategy and Risk,” she said.

They’re not the only ones who think Trump’s parade idea is, frankly, dumb. First reported by the Washington Post, the proposal has been met with strong opposition from Congressional Democrats and lukewarm feelings from Republicans.

“I think a parade showcasing our military and the sacrifices they make to our country would be appropriate as a way to say thank you,” Sen. Lindsey Graham (R-S.C.) said to CNN. “But I am not interested in a military hardware display that would be cheesy and project weakness.”

According to the Post, Trump was inspired by a Bastille Day parade he saw in France and has requested one just like it. Military officials reportedly rolled their eyes at the idea, and the internet at large has mocked the president’s vision, comparing it to the military posturing parades held in Nazi Germany and North Korea.

I have asked the Pentagon to work something up for me based on this concept board I put together pic.twitter.com/5JddWgiyGs