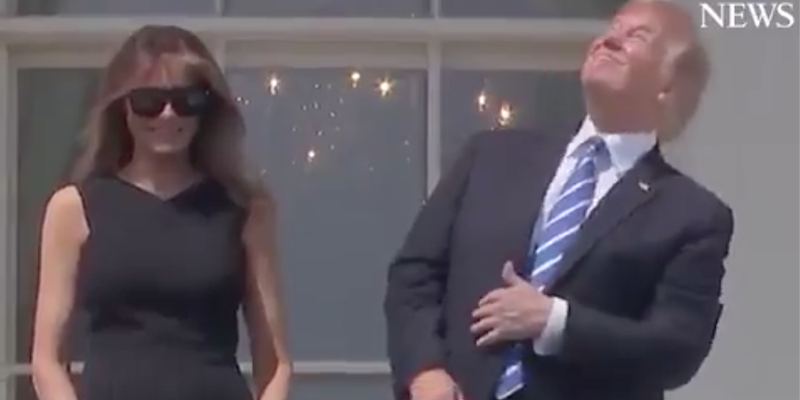 It didn't take eclipse glasses to see this coming.

At one point, Trump appeared to look up at the sun with the glasses off, something experts have been warning for weeks can cause severe eye damage.

“Don’t look,” an aide shouted from below as Trump raised his eyes toward the sun, according to Wall Street Journal reporter Ted Mann:

As he did this, someone in a crowd of aides below shouted "Don't look." pic.twitter.com/dtfSLEzcAZ

Other sources confirmed that the president attempted to view the eclipse with his naked eyes:

No one could have predicted that the leader of the free world would do something so uncharacteristically foolish. Especially twice, as this video from NBC shows. (He did it once without his son Barron next to him, as the Ted Mann tweet showed, and another time with Barron in the frame, seen below.)

President Trump sneaks a peek at the #SolarEclipse2017 after taking off his protective glasses pic.twitter.com/sqhhV93LYF

Oh, wait, someone did predict it.

id say theres about a 50% chance this happens later pic.twitter.com/dQ1zqZWxqv

Guy with Twitter jokes Leon Chang put the chances of Trump staring at the eclipse, maybe even going blind in the process, at 50 percent this morning. When he heard that the president had, in fact, peered at the sun without eye protection, he responded, “fucking lmao.”

Fucking lmao indeed. But if there’s one thing we’ve learned from the Trump presidency, it’s that Donald does what he wants, and everyone else—even his own advisers—just has to deal with it.