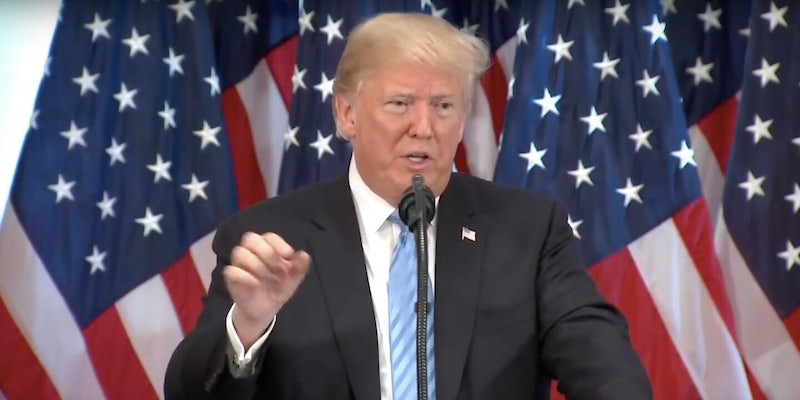 'It's a very dangerous period in our country.'

President Donald Trump on Wednesday hosted a solo press conference from New York City, during which he addressed the ongoing allegations of sexual assault against Supreme Court nominee Brett Kavanaugh.

This is Trump’s fourth press conference of his presidency, according to CNN. Asked about the accusations against Kavanaugh, Trump said, “These are all false to me. These are false accusations in certain cases, and certain cases even the media agrees with that.”

Trump, who has been accused of sexual misconduct by 17 women, also said the accusations women made against him were “false.”

“I was accused by, I believe it was four women,” Trump said. “I was accused by four or five women who got paid a lot of money to make up stories about me. We caught them and the mainstream media refused to put it on television … So I’ve had numerous accusations about me.”

Trump was then asked if he had a message for “the young men of America.”

This comment, in particular, stuck out to many on social media. Discourse around it was fervent on Twitter, with many interpreting that Trump directly called women who accuse men of assault “evil people.”

The accusers, the victims are the "evil" people. Launch me into the sun, please.

#TrumpPressConference Women in America. You see how dangerous this administration is becoming for you? Its getting worse by the minute. The President of the united states just called a rape victim EVIL. #MeToo

I see you’re doing your part to kill the #metoo …”these women” are destroying the credibility of all women…three women, multiple accusations…zero proof….except the proof of how evil Democrats are… https://t.co/sNfiqQ2VgG

And DAMN painful for Judge Kavanaugh and his family who have been VICTIMS of your sick evil agenda. NO innocent man is safe! And you are hurting the #MeToo movement and women who are TRUE victims/survivors! SHAME!!

The entire #MeToo movement is abused by politicians by generating false accusations and then shame you to accept them, therefore giving them a buff to thier smear tactics, taking away from the actual real victims and using a "movement" for evil.

So basically it’s all evil Democratic women driving the #MeToo movement. Got it.

To be clear "it's being perpetrated by some evil people", it= reporting sexual assault and "evil people" = women who accuse men he likes, and "dangerous times" = the #metoo era??? Or am I misreading this??

Evil! #metoo is not a “political ploy” for fucks sake it’s about women who have lived their lives in fear of confronting their abuser(s). #metoo is OUR VOICE. Even if you are too scared, we will speak FOR YOU! https://t.co/FXiwEEDxKW

Others responded that they agreed with Trump.

#MeToo is just another tricky word the Dems came up with to fool people into thinking they are for women! It's really a War ON Women and MEN movement. See how they do that??? Planned Parenthood sounds so kind but its murding babies to sell their parts/blood. Evil to the core. https://t.co/dzIuNohNQP

Totally agree with you. #metoo has turned into an evil thing. Very scary for your husband, son, brother, father, male friends in that anyone can accuse them of anything & #metoo wants them convicted with just that accusation.