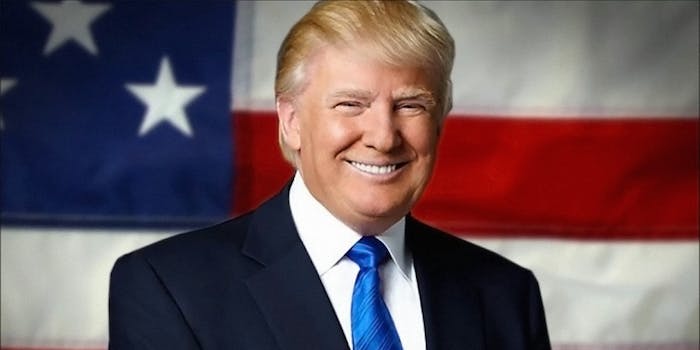 People aren't sure how to handle this one.

President Donald Trump on Thursday morning tweeted a mocking meme showing him literally eclipsing former President Barack Obama, sparking questions over whether the meme is racist—or just an exceptionally strange thing for the president of the United States to tweet.

The meme Trump retweeted came from Jerry Travone, a self-described “YouTube actor and political junkie” who is not shy about his support for Trump.

Within moments after Trump retweeted Travone, people began predicting that liberals would view a meme in which Trump, who is white, blocks out Obama, America’s first black president, as racist.

You know the left thinks this is racist! LoL https://t.co/aT7DAEsHuW

Prediction: The alt-left will have raging fits of hysteria claiming this Trump retweet is racist. In 3,2,1…. https://t.co/1efGiGl2HB

Some did, indeed, find the meme racist, particularly in light of Trump’s response to a violent white supremacist rally in Charlottesville, Virginia, last week.

After all that’s happened, this visual is a stark example of white supremacy, literally blotting blackness out. https://t.co/EosQ27L7gQ

In response to one of those critics, Travone told the person, “go fuck yourself, pussy.” However, he appears to have deleted that tweet.

For the most part, people aren’t responding with accusations of racism. Instead, they’re just baffled by the leader of the free world engaging in petty politics with his predecessor.

The president of the United States just re-tweeted this.
Imagine any other president doing something similar. You can't. Again. https://t.co/P5lUf84A8p

Trump retweeted this. So, here we are. https://t.co/kSQhpUy0fk

Yesterday Trump: 'It is 'time to heal wounds that divide us'

The leader of the free world retweets….. https://t.co/bPVfDIdnuP

Others simply pointed out the strangeness of the metaphor the meme makes. Is Trump saying he’s the moon and Obama is the sun? If so, does that mean Trump sees himself as the one casting a dark shadow across the entire United States?

So Obama is the sun — the bright center of our galaxy — and Trump is the moon, a dead rock that briefly obscures it? That's your metaphor? https://t.co/7Bs3R1OFAu

He understands what happens *after* the eclipse is over, right? https://t.co/P7sgV3OGyT

Trump retweeted this. Admitting that he is the moon to Obama’s sun and a fleeting passing thing that fills people with fear. https://t.co/v9dSS4b1Ay

Trump just retweeted this. He confirms that his fat round cheese moon face has blocked Obama's brilliant sunshine from reaching earth. https://t.co/JkVvJlrCLQ

Regardless of the meaning of the meme, one thing is certain: Trump will do something else soon that will eclipse all of this.