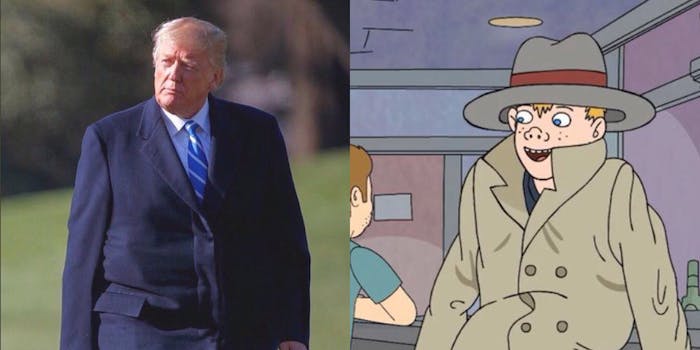 That frumpy-looking photo of Trump is fake

A photoshopped image of the Donald Trump has the trolls on Twitter running wild with ideas of what the president keeps hidden beneath his coat.

A rather alarming photo of President Donald Trump began circulating on Twitter on Sunday, where the president looks, well, unwell—to say the least.

It turns out, the photo above is a manipulated and photoshopped version of a different photo. Even the original photo, however, shows why the president typically forgoes buttoning up his entire coat.

Honestly, let's just make fun of his stupid coat and not his weight. pic.twitter.com/ATvtnBLqrK

Of course, that didn’t stop folks on Twitter from running wild with the photo, trying to guess what exactly is hiding beneath Trump’s coat.

Who wore it better? pic.twitter.com/nwcGQDT1OG

The most popular hypothesis is that Trump is actually just three kids on top of each other inside a trench coat.

Trump has like four Kuatos growing out of his midsection and they all look like Lou Dobbs. pic.twitter.com/O8kvZcX2An

Live footage of Trump in his magical coat dress. pic.twitter.com/BLIkcwGc1Q

Wait:
It looks like Donald Trump is actually a series of kids hiding inside a large blue coat and bad wig
“Why yes I AM MR PRESIDENT why do you ask?’” pic.twitter.com/8Dpmg7e205

It turns out @realDonaldTrump is actually just 16 pigs in a trench coat trying to buy a movie ticket. https://t.co/3UBczr7k4J

Trump looking like the type of Scooby Doo villain where it's really two kids in the trench coat, one standing on the other's shoulders. https://t.co/WmZToiKxwM

Meanwhile, as trolls made jabs at his weight and seemingly lack of style, Trump was tweeting about golf.