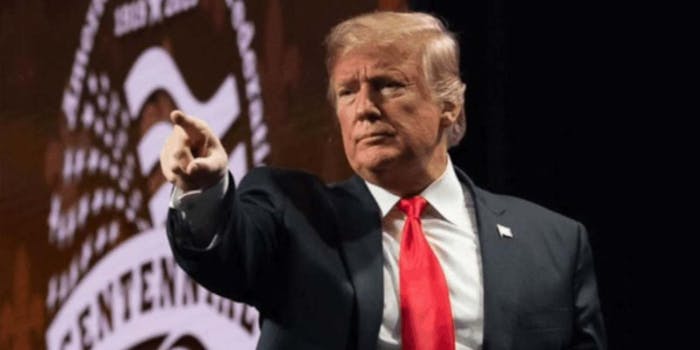 Trump has been defensive about the size of his hands for decades.

Analysis of Trump’s official Facebook and Instagram pages show that “at least three different retouched photos” have been posted since October of last year.

In one such example, Gizmodo’s Matt Novak points to a photo of the president uploaded to both accounts in the last several days. When compared to the original version of the photo on the White House Flickr page, obvious changes become noticeable.

“As you can see in the comparison above, Trump’s right shoulder has been slimmed down and his face is looking thinner,” Novak states. “He’s also gotten a haircut—well, a digital one anyway—and in one of the strangest alterations, Trump’s fingers have been made slightly longer. Seriously.”

The president has been defensive about the size of his hands since journalist Graydon Carter called him a “short-fingered vulgarian.” Carter even claimed in a 2015 interview that Trump has repeatedly sent him photographs of himself with his hands circled in gold Sharpie in order to “highlight the length of his fingers.”

“I almost feel sorry for the poor fellow because, to me, the fingers still look abnormally stubby,” Carter said.

Another photo posted to Trump’s Facebook page in October 2018 also shows a longer finger when compared to the original picture on Getty Images. Trump’s jacket has also been changed in certain areas to appear smaller while “a few stray hairs” have been digitally trimmed.

The third photo analyzed by Gizmodo, published to Trump’s Facebook page Friday, once again contains changes from its original.

“[I]t can be hard to see anything different between the two photos. But once you flip between the two it’s clear that the president’s stomach has been made slightly smaller,” Novak writes. “And the skin around his neck and the lower part of his face has been tightened up a little bit.”

The alterations, Novak argues, are interesting in light of the president’s continuous remarks about “fake news.”

“Does it matter if the president is overweight? Not really,” Novak says. “But for a guy who’s constantly complaining about fake news, it’s pretty hypocritical that President Trump’s social media team is using photos that have been altered to make him look thinner and less wrinkled.”