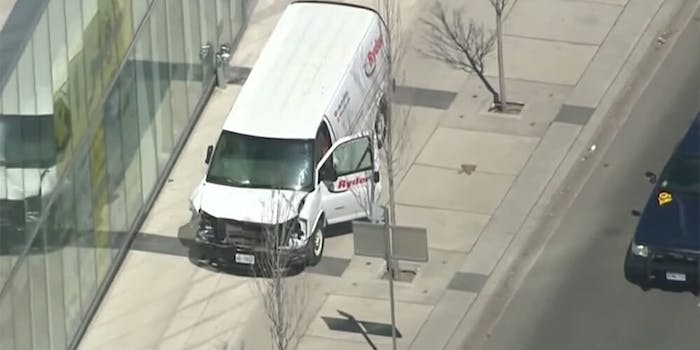 Alek Minassian, charged on Tuesday with 10 counts of murder and 13 counts of attempted murder after driving his van over a crowded sidewalk in Toronto, Canada, is being linked to an internet subculture for those who describe themselves as “involuntarily celibate.”

Amid questions about the motive for Minassian’s rampage, which killed 10 and injured 15 pedestrians, reports have surfaced that the perpetrator referenced the “Incel Rebellion” in a cryptic Facebook update posted just hours before the attack took place.

“Private (Recruit) Minassian Infantry 00010, wishing to speak to Sgt 4chan please,” the social media post said. “C23249161. The Incel Rebellion has already begun! We will overthrow all the Chads and Stacys! All hail the Supreme Gentleman Elliot Rodger.”

Facebook deleted Minassian’s page soon after he had been identified but has reportedly confirmed that the post, first shared publicly by Global News TV crime reporter Catherine McDonald and preserved by internet archives, is authentic.

It’s the first major lead in what might have caused Minassian to carry out his attack. Here’s a breakdown of what exactly the Facebook post tells us.

Incel is short for “involuntary celibate” and is an internet community of people, mostly men, frustrated at their lack of sexual relationships or dating opportunities. Those that consider themselves part of this community discuss their feelings in dedicated forums.

In the incel grievance subculture, frustration is projected onto those who self-described incels consider their opposites or enemy, the confident “Chad and Stacey” types. The “Chad and Stacey” meme, cited by Minassian in his status, is adopted from controversial message board 4chan—also referenced by Minassian. It caricatures a strong masculine individual who incels perceive as their more successful rival. This oppositional culture frames almost everything within the community, from gaming character choices to humor.

Where the subculture has made headlines, however, is when it has manifested as an extreme misogynistic ideology that blames feminism and womankind for sexual rejection and, in some cases, advocates vengeful violence.

On forums and blogs, angry men frequently express their rage at society and women, often lapsing into indulgent murder fantasy. Salon reported on a user on one such forum who wrote, “I am seriously thinking about getting a gun and shooting everything up… I think if I do end up going on a mass shooting spree it will be due to the mental damage/stress from being isolated from meaningful human contact for too long.”

This, of course, is not representative of every frustrated male virgin or self-identified incel, but the toxic ideology is by no means uncommon, and the fantasy sentiments of murderous revenge have even proliferated mainstream websites.

Last year, Reddit banned incel subreddits under new guidelines that aimed to confront hate speech and glorification of violence on its platform. Redditors in the r/incel “support group” had been openly calling for violence against women and rape. The forum had around 40,000 members and praised the actions of incel killers like Elliot Rodger, who Minassian named in his post.

Who is Elliot Rodger?

Elliot Rodger was a 22-year-old gunman who killed six people and injured over a dozen in Santa Barbara, California, in 2014. In a 140-page manifesto written before his attack, Rodger complained at length about having been rejected or ignored by women and his status as a virgin. The killer described his plans to carry out the shooting as “retribution.” After the attack, Rodger shot himself in the head in his vehicle.

Since then, Rodger has become an idol and martyr to the most violently inclined incels. On Reddit’s banned r/incel subreddit, some users even called him “Saint Rodger.” It’s him that Minassian promoted when he wrote, “All hail the Supreme Gentleman Elliot Rodger” in the Facebook post.

What about the military numbers?

According to Vice, Minassian had served in the Canadian army for two months in late 2017 before asking for a voluntary discharge prior to completing training. The number “00010” is a reference to the Canadian army’s occupation number for non-officer infantrymen, and “C23249161” appears to be a service number.

Although neither Minassian nor Canadian investigators have confirmed that Minassian’s incel connection was a motive for the devastating murder spree, there is little doubt that some toxic internet communities will be celebrating.