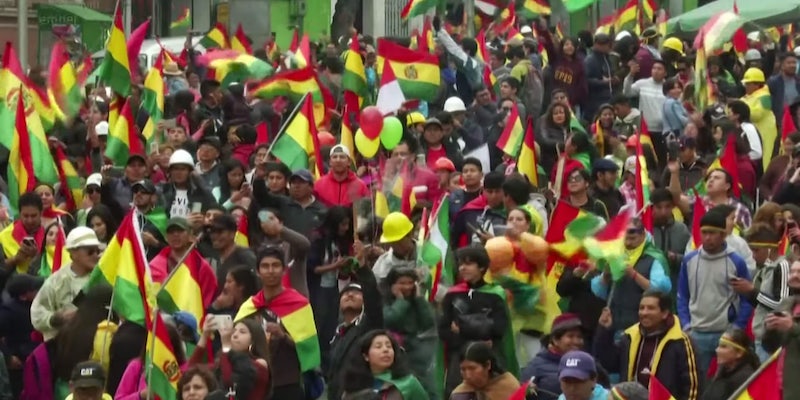 She recently shut down the page after receiving death and rape threats.

A Bolivian university student named María Alejandra Salinas has been arrested based on charges of diffusing critiques against Bolivia’s interim government.

In November, Bolivian President Evo Morales resigned with the explanation that he did so after learning police were ordered to arrest him illegally. He, along with supporters, dubbed it “a coup.” A time of uncertainty and turmoil for the Bolivian people ensued. In addition, there is also confusion online as discourse surrounding the event has been centered on whether the regime change even was a coup and if it was backed by the United States government.

At least 68,000 fake accounts were created, posting over 1 million tweets from Nov. 9-17 – before, during, and after the couphttps://t.co/wFxHNJMlwL

To counter the possibility of state media, Salinas operated as an administrator of a leftist meme account on Facebook known as Suchel. The page quickly gained over 10,000 followers after conservative Senator Jeanine Añez Chavez became Bolivia’s interim president.

On Dec. 28, Salinas announced through social media she had decided to terminate Suchel out of fear for her safety and the safety of her family after receiving multiple death and rape threats.

But now its owner has to close it to stop the rape/death threats against her & her family. pic.twitter.com/bvnvxrFfIh

Student and leftist feminist blogger Alejandra Salinas has been detained with baseless claims of inciting.
Her blog Suchel had been critical of the post-coup government. Repression and silencing at its finest. #TodosSomosAleSalinas#BoliviaEnDictadura https://t.co/fmgRFC8q2N

Salinas was accused of instigating violence through content on Suchel. “They say that I promote hate, indoctrinate people. This is just a page that doesn’t even reach 10% of the population in Bolivia I have no power over people,” Salinas said in response to the accusations.

Since her arrest on Dec. 31, La Universidad Mayor de San Andrés in Bolivia publicly condemned Salinas’s detention as a major blow to free speech in the country.