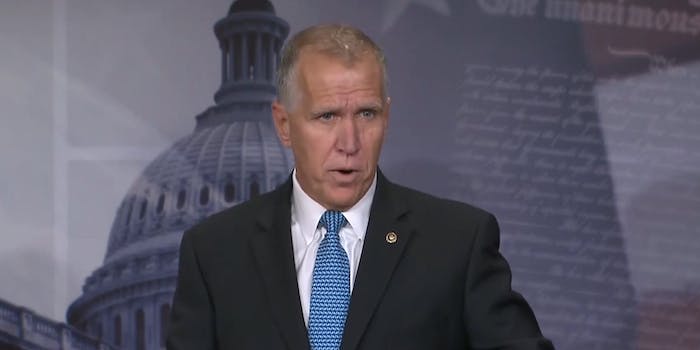 Under the bill, DREAMers would have to pass many, many hurdles, however.

Republican senators unveiled a bill on Monday that they hope will reform the Deferred Action for Childhood Arrivals (DACA) program.

Sen. Thom Tillis (R-N.C.), Sen. James Lankford (R-Okla.), and Sen. Orrin Hatch (R-U.T.) announced their intention to introduce the “Solution for Undocumented Children through Careers Employment Education and Defending our nation,” or the SUCCEED Act, which they called a “fair and compassionate” solution facing undocumented children in the United States.

DACA, which shields undocumented immigrants who entered the United States as children from deportation for two years after undergoing an application process, was abruptly ended by President Donald Trump’s administration earlier this month, sparking protests across the country.

The SUCCEED Act would provide “a fair but rigorous track for undocumented children to qualify for conditional permanent resident.”

The legislation would allow children to receive conditional status by having gainful employment, pursuing postsecondary or vocational education, or serving in the military.

To qualify for that status, undocumented children must have arrived in the United States before the age of 16 and before DACA was enacted, obtained a high school diploma or equivalent, pass a “rigorous” criminal background check, submit “biometric and biographic” data to the Department of Homeland Security, register for military selective service, pay of existing federal tax liabilities, and sign an acknowledgement that they would not be eligible for immigration benefits if they are convinced of a crime.

“The SUCCEED Act is a fair and compassionate solution that requires individuals to demonstrate they are productive and law-abiding members of their communities to earn legal status,” Tillis said. “This is a merit-based solution that should unite members of both parties, and I look forward to working with my colleagues on the path forward.”

After five years of conditional status, applicants could renew their status for another five years, and after 10 years, they can apply for lawful permanent status or a “green card.”

The SUCCEED Act comes on the heels of Democrats pushing to bring the DREAM Act to the floor of the House of Representatives for a vote.