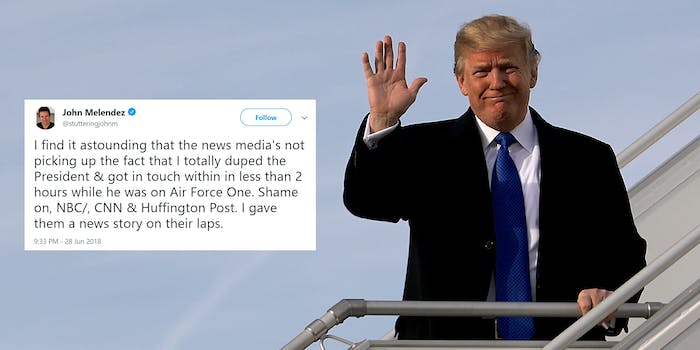 It appears to be authentic.

Stuttering John, a podcaster who used to appear on The Howard Stern Show, managed to call the White House pretending to be a U.S. senator and spoke with President Donald Trump, while the president was on Air Force One.

I find it astounding that the news media's not picking up the fact that I totally duped the President & got in touch within in less than 2 hours while he was on Air Force One. Shame on, NBC/, CNN & Huffington Post. I gave them a news story on their laps.

On his podcast, The Stuttering John Podcast, the comic born John Melendez pretends to be embattled U.S Sen. Robert Menendez (D-N.J.) and dials the White House.

On his podcast, Melendez continually teases that he’s gonna call Trump, and said “Donald has always picked up the phone when I call him,” and reads off the number for the White House switchboard.

He dials what he claims to be the number and says, “this is his friend, Stuttering John.”

Stuttering John does know Trump, the two have appeared together on The Howard Stern Show.

An operator says he is not available and hangs up after Stuttering John say he knows the president. Then he calls again, saying he’s from Sen. Menendez’s’s office. Two hours later, The White House calls back, and Trump is put on the line.

“Hi Bob. How are you, congratulations on everything, we’re proud of you,” said what appears to be the voice of Trump. “Congratulations, you’re doing a great job.”

They discussed the immigration situation at the border, where various bills are competing in Congress: “So Bob, let me just tell you: I want to be able to take care of the situation every bit as much as anyone else, at the top level. I’d like to do the larger solution rather than the smaller solution; they’re doing them step by step. I think we can do the whole thing … I have a good relationship with the party, you have a good relationship with the party, and I think we could do a real immigration bill. We have to have security at the border, we have to have it. I mean, look, you’ve got 60 percent of the country, they’ve got to have security at the border.”

“I have a list of people, I have a big list of people Bob, and we’ll take a look and it and we’re gonna make a decision, I’ll probably make it over the next couple of weeks,” replied the person who appeared to be Trump.

According to some reporters, the return phone call was legit.

WH has been scrambling this morning to figure out how this happened. https://t.co/OnLDLmUK7t

You can listen below. The White House bit starts at approximately the 35:00 mark and Trump calls back at 1:07:00