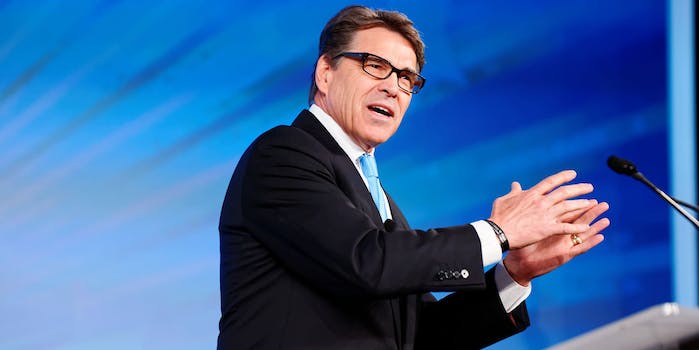 Perry made his remarks while promoting the benefits of oil.

Speaking at a forum hosted by Axios and NBC News on Thursday morning, Perry touted the benefits of fossil fuels following his trip to South Africa for Africa Oil Week, where he says a girl lamented how a lack of electricity forced her to use lamps that emit toxic fumes, the Hill reports. Perry’s comments came in response to a protester who questioned his pro-fossil fuel stance by asking, “Why are you against clean air and why are you against people’s health?”

“Let me tell you where people are dying is in Africa,” Perry said, “where a young girl told me to my face, ‘One of the reasons that electricity is so important to me is not only because I’m not going to have to read by the light of the fire and have those fumes literally killing people.’”

Perry went on to claim that, thanks to fossil fuels reliably generating electricity, they help prevent sexual assault by providing “light that shines.”

“But also from the standpoint of sexual assault,” Perry said. “When the lights are on, when you have light that shines, the righteousness, if you will on those types of acts.”

Perry’s comments come amid a surging awareness about just how rampant sexual violence and harassment is in this country. Sparked by the women speaking out against Hollywood mogul Harvey Weinstein and other Hollywood men, the conversation was further amplified by the #MeToo campaign, in which survivors of sexual assault and harassment spoke out about their experiences.

While some right-wing critics argue that Perry is correct in his assessment because other types of crime are reduced by the presence of streetlights, the notion that fossil fuel-powered electricity is a viable solution to sexual violence perpetuates the dangerous myth that rape is done only by strangers in dark alleyways.