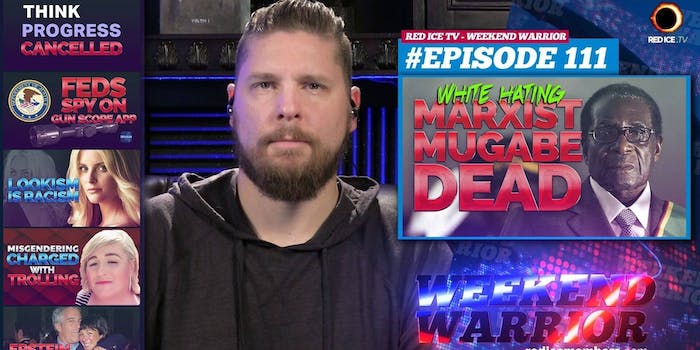 The hate group is livid at its ouster.

A popular news outlet that caters to white supremacists and anti-Semitics has had two of its YouTube channels deleted by the platform in the past week, according to the Southern Poverty Law Center. And boy, Red Ice TV is not happy about it.

Last week, the original Red Ice channel, which reportedly boasted more than 335,000 subscribers, was taken down by YouTube for multiple terms of service violations, but the SPLC—which monitors hate groups in the U.S.—noticed that the racist organization sent followers toward a secondary channel that had previously been set up in case the main channel was threatened.

After the SPLC pointed that out to YouTube, the secondary channel was also deleted because of a “circumvention of technologies” complaint. Red Ice blamed communists, anti-whites, and the SPLC for the shutdown.

“Communists & anti-Whites don’t like free speech, because we expose them,” Red Ice tweeted on Tuesday. “All they know is to snitch, whine, report, lie, complain & ‘go tell’ on you. They will do anything to silence those they don’t agree with. It’s submission forms on websites today, re-education camps tomorrow.

Red Ice founder Henrik Palmgren, who started the hate group in 2003, also was livid at the SPLC, ranting on Twitter that it’s a group of “politically motivated liars that want to silence independent media and people that are effective in exposing the ruling elites agenda of globalization and nation-wrecking. They are an obstacle between you and truth itself. Don’t let this stand.”

He continued by writing, “They are at the same time trying to stifle my ability to take care of my family by undermining my business, spreading lies about it and misrepresenting what we stand for in order to limit our ability to reach an audience on the digital town square.

“They are preventing us from reporting on current events, news, speaking our minds and taking part in the political debate. Why? Because they don’t agree. We have never voice hatred towards anybody and we never will. These are lies they use to ‘legitimize’ silencing opposition.”

The SPLC said the YouTube bans will “sting the hate site and the larger movement it serves” and that Red Ice “lost countless videos promoting racists views.” Still, Red Ice continues to operate on Twitter, Facebook, and BitChute.