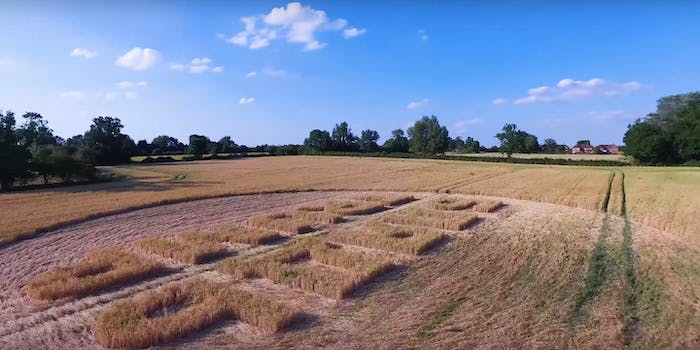 He'll fly right over it in on his way to London.

On President Donald Trump‘s way to meet U.K. Prime Minister Theresa May on Friday, he’ll be greeted with a giant crop circle that says “Fuck Trump” in Russian.

The Hill reports that marketing agency The Tenth Man installed the crop circle in the village of Stoke Mandeville, England, this week with aid from crop circle experts Circlemakers. The message is conveniently situated along the route Trump’s helicopter will take from London to Chequers, May’s country house.

“We wanted to do something impactful that would get people talking ahead of Trump’s arrival, and everyone loves a crop circle mystery,” a spokesperson for The Tenth Man told local newspaper the Bucks Herald.

The Herald reports that the project took 14 hours to complete and is more than 650 feet wide. The owner of the Moat Farm, where it’s located, couldn’t care less about the political message. He said he’s neutral on Trump—and pro-monetary compensation.

“There was a financial transaction, I won’t say how much but it was renumeration for the damaged crops, which won’t be salvageable,” the owner said.

The crop circle isn’t the only special treat awaiting the president in the U.K. Protesters won a battle with London mayor Sadiq Khan for the right to fly a ginormous Trump baby balloon over the city during the visit. Meanwhile, Green Day’s American Idiot is climbing U.K. charts as a signal of his arrival.