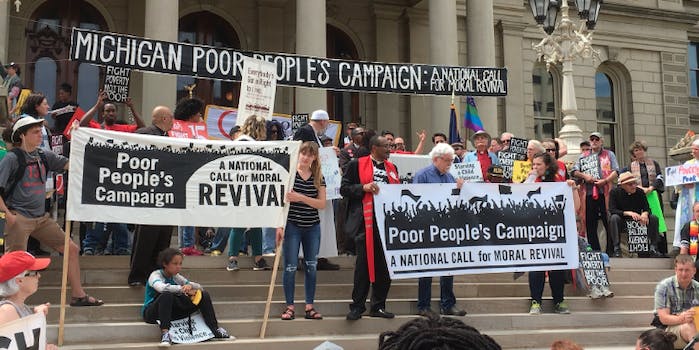 'We know this is not and cannot be the America we settle for.'

A multicultural and multifaith coalition of low-wage workers and activists will protest at 30 state capitals across the country on Monday, aiming to revive the Poor People’s Campaign launched half a century ago by civil rights leader Martin Luther King Jr.

The Poor People’s Campaign has promised the largest non-violent direct action movement in U.S. history with protests and teach-ins over the next 40 days, which they hope will spark a nationwide conversation and provoke lawmakers, the Los Angeles Times reported.

“We understand that in order to change things we have to do the rallies, we have to do organizing, we have to do voter mobilization, we have to engage in civil disobedience,” said the Rev. William J. Barber II, who co-chairs the organization alongside the Rev. Liz Theoharis.  “People will come together and put their mouths and their bodies on the line to force the nation, the media to have to see and hear the people that are impacted.”

Started in 1968 by King, the civil disobedience movement brought thousands of Americans together to fight for fairer income and living standards. King was assassinated in April of that year and the movement struggled afterward, but now activists want to realize the movement’s lost vision in an America that still faces many of the same systemic problems.

The rallies planned by current organizers will address today’s major social and economic problems in a series of weekly themes. The themes cover racism, poverty, the war economy and ecological devastation. The momentum of successive weeks will then culminate in a mass rally of solidarity in Washington, D.C. on June 23.

The U.S. Census says that 41 million Americans live in poverty, but the leaders of the Poor People’s Coalition point to figures of 140 million published by the Institute for Policy Studies.

“All over this country, we continue to see what is not often seen or talked about in our politics, in our political debates, or even in the media,” Barber told Democracy Now. “Two hundred fifty thousand people are dying every year from poverty and low wealth. Sixty-four million people work with less than a living wage, 54 percent of African Americans. And these realities hurt children and women and the disabled the most.”

It remains to be seen what kind of impact the movement will have over the next 40 days, but organizers are very aware that the mass voter mobilization they dream of will take work and time.

Terrence Wise, a fast-food worker who has fought for the living wage and led campaigns for years, believes in the mission and that bringing working class people together will achieve change.

“I’m hoping it shakes America’s conscience—that it makes many more aware,” Wise told NPR. “The goal is to bring more and more Americans into the movement and help make things better on all levels for everyone.”