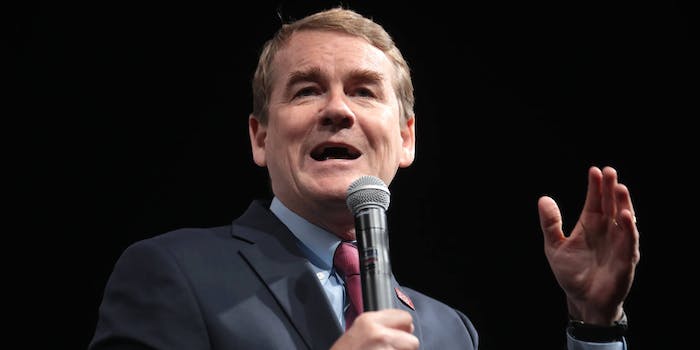 Sen. Michael Bennet (D-Colo.), a former 2020 Democratic presidential hopeful, called out Facebook for failing to take “sufficient steps” to combat misinformation on its suite of platforms.

Bennet sent a letter to Facebook CEO Mark Zuckerberg on Monday where he asked the social media giant to give him more information about how it is trying to halt the spread of misinformation, hate speech, and election interference, among other things.

In the letter, Bennet cites examples in the Philippines, Brazil, and Myanmar where governments used disinformation.

The Colorado senator also brought up a recent op-ed Zuckerberg wrote in the Financial Times where Zuckerberg said that the company was “continuing to make progress” on election disinformation (and other issues), and said he was open to some forms of regulation surrounding the platform.

“The Myanmar and the Philippines cases highlight the dangers of introducing and expanding platforms without first establishing the local infrastructure to mitigate the effects of hate speech and other dangerous incitement,” Bennet wrote. “In Brazil and Europe, even when Facebook made concerted efforts to mitigate the spread and impact of disinformation in elections, its measures were inadequate.”

Bennet also asks Facebook to answer a number of questions including: what steps it is taking to limit disinformation and hate speech; what it has learned about inauthentic behavior efforts in Brazil and the European Union; how it addresses disinformation coming from the government or state-sponsored parties; and how it protects “vulnerable populations,” among other things.

“In dozens of countries, Facebook has unparalleled power to shape democratic norms and debate, and as a result, elections. I am concerned that Facebook, as an American company, has not taken sufficient steps to prevent its platforms from undermining fundamental democratic values around the world,” Bennet said in a statement.

The Colorado senator has requested answers to his questions by April 1.