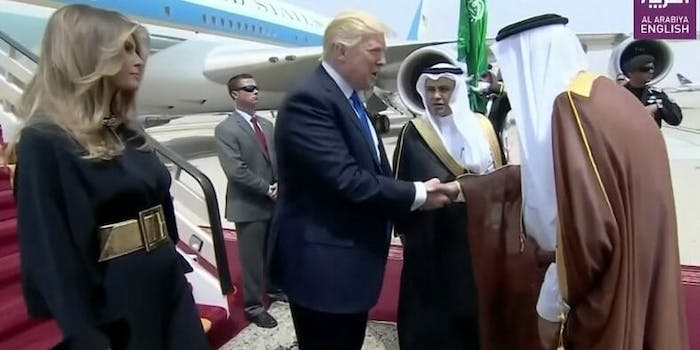 It’s not unusual for first ladies not to wear the traditional head scarf while traveling to Saudi Arabia. Michelle Obama didn’t don one in 2015, and Laura Bush generally abstained from wearing them. As secretary of state, Hillary Clinton also let her hair down when visiting Saudi Arabia on official business.

On Saturday, accompanying Donald Trump on his first international trip as president, Melania Trump emerged from Air Force One with, as CBS News wrote, her “hair [blowing] freely in the breeze at King Khalid International Airport.”

None of which is an issue, because even though the country’s women must cover themselves, foreigners aren’t necessarily held to the same standard. But this is what Trump once wrote about Obama not covering her own head.

Many people are saying it was wonderful that Mrs. Obama refused to wear a scarf in Saudi Arabia, but they were insulted.We have enuf enemies

Not surprisingly, Twitter was ready to pounce on the old tweet and remind Trump of his former views.

There are people on Twitter praising Melania Trump for not wearing a headscarf and saying they are finally proud of a first lady. Ahem…. https://t.co/ciQA8rNaY5

Regardless of how the president now feels about first ladies who decline to wear head scarves while in Saudi Arabia, Melania Trump’s decision served as another reminder of how prolific her husband has been on Twitter. And how it so very often contradicts with his new job.

Which is why this is a story in the first place.