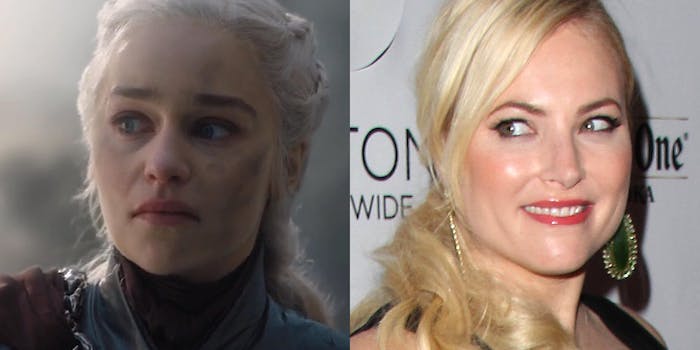 Meghan McCain compares herself to Daenerys, gets dragged

It was an inapt comparison.

After a heated episode of The View yesterday, where Whoopi Goldberg told Meghan McCain “to please stop talking,” McCain has responded by tweeting out a GIF of Daenerys from Game of Thrones alongside the statement: “Good morning – to all the fellow conservative “girls” who won’t be quiet.”

Good morning – to all the fellow conservative “girls” who won’t be quiet. pic.twitter.com/958DzFDAEp

Given Daenerys Targaryen transformed into a mass murdering war criminal at the end of the show, this was maybe not the best choice on McCain’s part, something Twitter was quick to point out.

This is the girl that ended up getting killed by her own lover on account of becoming a genocidal fascist monster.

… And dying rather pathetically at the end. You really haven’t watched GOT, have you @MeghanMcCain ?

When you don't understand pop culture.

Even one McCain fan saw the unfortunate comparison and asked her if she actually knew how the show ended.

Then there are those who consider it an apt comparison, but not for the reasons McCain thinks, with Twitter user Angela Belcamino saying “What do conservatives have in common with Daenerys? She stripped humans of their lives if they wouldn’t bend the knee to her and conservatives strip humans of basic needs which also leads to the death… ok I see it now.”

What do conservatives have in common with Daenerys? She stripped humans of their lives if they wouldn't bend the knee to her and conservatives strip humans of basic needs which also leads to the death… ok I see it now. 🙄

You do realize she is undone by her unchecked self-righteousness and grandiose view of her own importance…right? I mean, that tracks, but this seems like more self-awareness than you're capable of.

Sadly, you see yourself as the hero, but truly, what you defend makes you the villain.

Oh look a Republican identifies with a rich white lady who acted like a savior then killed a bunch of innocent poor people. https://t.co/ffB5jgbXFg

This is code for “girls who love war crimes”

Even if McCain was going for pre-heel turn Dany, that’s not working out well for her either. Tweeters are happily pointing out that pretty much nothing Daenerys did prior to snapping at the end of the show could be considered conservative, making McCain’s tweet a double self own—either she’s nothing at all like the character she’s emulating or she’s channeling a mass-murdering villain.

I mean, she literally mass-murdered all the poors to get at her enemies…

That “girl” went over your head. Don’t hide behind conservatism …. you’re rude, inappropriate, entitled and annoying. And by the way, Daenerys wouldn’t appreciate an oppressor like you using her likeness.

Ahhh yes the Breaker of Chains, the pinnacle of Conservative morals!

Considering that Whoopi was telling her to be quiet so they could go to the commercial break, and McCain had spent the entire show shouting everyone else down, a lot of people are seeing this as yet another attempt by McCain to paint herself as the victim of liberal bias when really she was just being told to be polite and abide by the same rules as everyone else.